After road sweep of Rider, DII Flames destined for Delaware 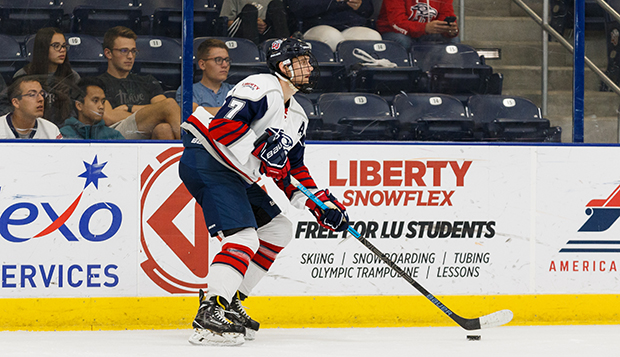 Junior forward Blake Flanders had a hat trick in the Flames' 7-4 series-opening victory at Rider. (Photo by Ellie Richardson)

Liberty University's ACHA Division II men's hockey team rebounded from its first tie and second loss of the season, Nov. 8-9 at the LaHaye Ice Center, with two wins over the weekend at Rider University.

The Flames, who moved ahead of two-time-defending national champion Florida Gulf Coast University to No. 1 in last week's second ACHA Division II Southeast Region rankings, improved to 15-2-1 with 7-4 and 5-0 victories over the Broncs (10-6). Rider is in the Mid-Atlantic Collegiate Hockey (MACH) North Division while Liberty competes in the South.

In Saturday's opener, Blake Flanders started the scoring off assists from fellow junior forward Michael Niederer and freshman forward Luke McFarlane with 14:04 left in the first period. Rider tied it at 1-1 with a power-play goal just over three minutes later before the Flames scored the next four goals — by sophomore defenseman Maxx Mitchell, Flanders, sophomore forward Peyton Nash, and junior defenseman Adam Norwinski — to seize a commanding 5-1 lead less than two minutes into the second period.

The Broncs pulled back within 5-2 before Flanders completed his hat trick on Liberty's lone power-play goal midway through the second period. They cut the Flames' lead to 6-4 before McFarlane capped the scoring in the final minute of the third. Both McFarlane and Niederer distributed four assists.

Liberty outshot Rider, 47-21, and junior goalie Adam Partridge made 17 saves in the win.

Flanders picked up where he left off in Sunday's rematch, breaking a scoreless tie with 28 seconds remaining in the first period off assists from sophomore forward Aaron Partridge and McFarlane. The Flames clung to a 1-0 advantage before adding four unanswered goals in the third period by McFarlane, Nash, graduate forward Jerrell Campbell, and sophomore forward Josh Malin.

Liberty outshot the Broncs, 45-20, and sophomore goalie Dakota Cyhaniuk made 20 saves to improve to 9-0 with his fourth shutout, lowering his goals-against average to 1.38 and raising his save percentage to 93.4.

The Flames will return to action this weekend with another MACH series at South Division rival Delaware (9-5-1), with the puck dropping at 8:45 p.m. Friday and 2:15 p.m. Saturday.