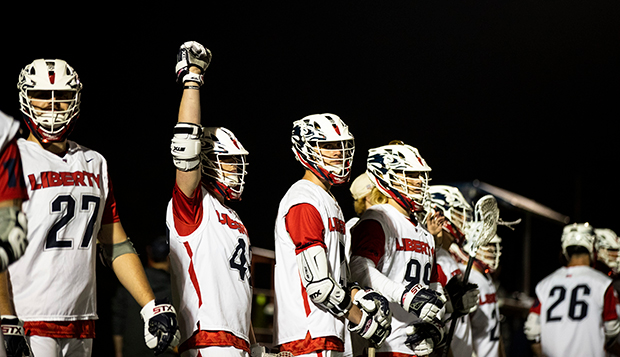 Arguably the most challenging regular-season schedule in program history awaits Liberty University's men's lacrosse team when it opens its 2020 campaign on Feb. 8 at SELC Northwest Region rival Tennessee. That's only fitting in that the Flames are coming off their most successful season since moving up to the MCLA Division I level in 2014, finishing 16-2 and fifth in the 2019 MCLA Top 25 rankings.

"We are looking forward to a really competitive schedule," Flames Head Coach Kyle McQuillan said, noting that nine of Liberty's 14 opponents will start the 2020 season ranked, including the past two MCLA Division I national champions.

After climbing to an all-time high No. 3 ranking during a 14-0 regular season last spring, the Flames defeated 2018 national champion Michigan State in the MCLA tournament opener before being eliminated in the quarterfinals by eventual national champion South Carolina.

This season, Liberty will have a rematch with the 12th-ranked Spartans on Feb. 23 at the Liberty Lacrosse Fields and challenge the top-ranked Gamecocks on March 21 in Columbia, S.C. That will be the last leg of a three-game Spring Break road trip, following a March 16 contest at No. 9 Florida State and March 18 date at unranked Florida.

"We have a pretty consistent strength of schedule," McQuillan said. "Florida is often right on the bubble of the Top 25 and we've got to take every game like it's a ranked opponent. We are not going to underestimate anybody."

Liberty edged South Carolina in the regular season, 13-12 on March 30 at the Liberty Lacrosse Fields, before being ousted by the Gamecocks in the SELC Tournament semifinals.

"South Carolina got the better of us last season, giving us our only two losses," McQuillan said of the Gamecocks, who became the first SELC team to reach the MCLA championship game, and then to win it.

After playing No. 7 New Hampshire and No. 14 Connecticut on March 28-29 at a neutral site in Madison, Conn., the Flames will meet No. 23 Boston College for the first time in their annual "Midnight Mayhem" game on April 3 before traveling to Wingate (N.C.) to face fourth-ranked SELC power Georgia Tech on April 5 and concluding the regular season on April 17 by hosting No. 13 Virginia Tech, which typically determines the Northwest Region champion and top seed going into the April 24-26 SELC Championships near Atlanta.

Liberty held off the Hokies on their home field, 13-11, in a fall season-ending scrimmage on Oct 26 in Blacksburg, Va. Since then, besides continuing their strength training and conditioning, McQuillan and his staff have found creative ways to keep their players active.

This past Saturday, they organized an Olympic-style Fall Championship event from 9 a.m. to 3 p.m., splitting players into two teams to compete each other in running, weight lifting, and swimming races on the Matthes-Hopkins Track Complex, at the Club Sports strength and conditioning facility, and the Liberty Natatorium.

"Since we are not out on the field competing, we've got to try to find ways to compete on a consistent basis," McQuillan said. "It is an opportunity to create some friendly competition and grow the team."

(Home games in bold, played at the Liberty Lacrosse Fields)