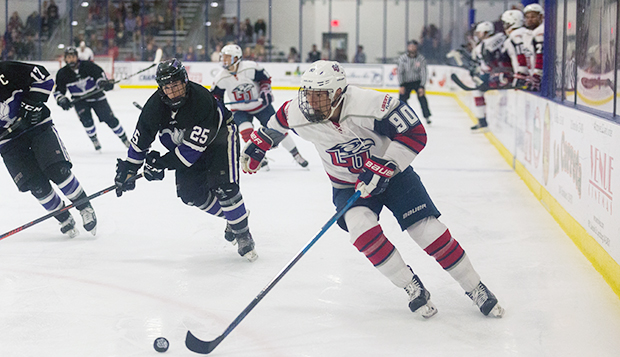 Cole Gammer skates around a couple NYU players in the corner at the LaHaye Ice Center. (Photo by Gabrielle Calhoun)

After being derailed in Friday night's opener at New York University, Liberty University's ACHA Division I men's hockey team got back on the winning track and regained first place in the ESCHL regular-season race with a 5-3 victory over the Violets, late Saturday night at Sky Rink at Chelsea Piers.

The sixth-ranked Flames got two goals from junior forward Cole Gammer and improved to 14-3, 7-1 in ESCHL play, while NYU slipped to 7-4-1 and suffered its first league loss to fall to 5-1.

"It was a good response (from Friday night's setback), but we were disappointed with the way we finished up the game," Flames Head Coach Kirk Handy said. "We need to be a whole lot better than we were. We let them come back in the game and we had our opportunities to distance ourselves and we weren't able to do that. We took our foot off what we were driving toward. We need to make sure we play a 60-minute game and that we stay focused for 60 minutes. We got sidetracked tonight."

With 41 seconds remaining in the first period, the Flames ended a scoreless tie by capitalizing on a power play. Liberty cycled the puck before senior forward Josh Hamilton sent an entry pass from behind the net to sophomore forward Arturas Laukaitis, posting up in the left crease, for a quick finish past NYU goalie Patrick Cavanaugh.

Midway through the second period, Liberty doubled its lead on a jam play in front by senior forward Zechariah Roberts after sophomore forward Josh Fricks skated the puck around the back of the cage.

The Flames extended their edge to 3-0 with 4:04 to go in the second when Hamilton chased down a lead pass in the high slot and senior forward Cody Clarke picked it up in the left circle, where he fired a wrist shot into the upper netting.

Moments later, Liberty capitalized on another quick counterattack when junior forward Jordan Bochinski received an outlet pass down the center of the ice and slapped a pass to Gammer beyond the Violets' defense for a one-on-one finish in the right crease and a 4-0 advantage.

NYU defenseman James Long ended the shutout with an unassisted score, skating up the left wing and past three Flames defensemen before threading his shot past freshman goalie Cédric Le Sieur through the five hole, trimming Liberty's lead to 4-1 in the final two minutes of the second period.

The Violets capitalized on the first power-play opportunity of the third period, cutting the deficit to 4-2 when defenseman Reagan Wortz received a pass from long and ripped a slap shot from the right point past Le Sieur.

The Flames played much of the third period on the power play and senior forward Quinn Ryan struck a post on a shot from the slot before Gammer finally converted from deep in the left crease in the closing seconds of a four-on-three, extending Liberty's lead to 5-2.

With exactly 1:00 remaining in regulation, NYU forward Brandon Ritchey capped the scoring with a wrist shot from the top of the right circle that slipped by Le Sieur.

"We let them get a couple goals tonight on the PK and our power play has to be a whole lot better," Handy said. "It needs to operate at a higher level if we're going to be successful long-term, so we'll make sure that we get it moving forward."

Liberty, the two-time defending ESCHL regular-season champions, will return to New York next weekend for another conference clash, this time at Syracuse, which dethroned the Flames in last season's ESCHL Tournament final.

"We are excited about that, to come back and continue on our journey here," Handy said.