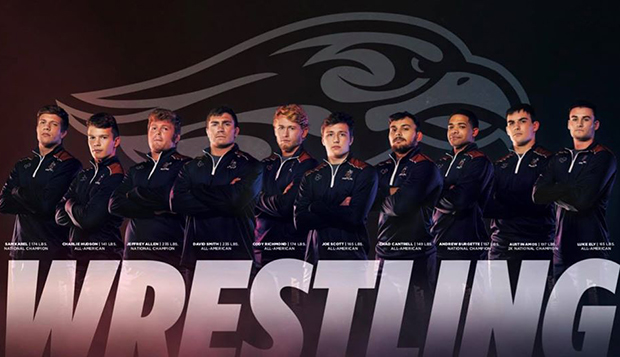 The Flames finished 3-1 on the day, dominating the three schools they beat — Southwest Virginia Community College (53-6), Huntingdon (Ala., 40-12), and Southern Virginia (41-6). Their only loss came against Otterbein (Ohio) University, by a 28-13 count.

"We want to beat every single team we wrestle and we fell short of that goal today," Liberty Assistant Coach Chris Williamson said, noting that the Flames forfeited at 133 pounds. "The three matches that we won, we didn't lose any individual matches, so we essentially went undefeated. That's pretty crazy, unusual for sure."

The other three went undefeated — freshman Tristan Walls was 3-0 at 125 pounds and both senior 149-pounder Michael Gowen and graduate 197-pounder Austin Amos finished 4-0.

Walls didn't wrestle his fourth match due to injury after winning his first two matches by fall and his third by forfeit.

"It was very refreshing to start off our duals with six points, rather than down six points as we did last year," Williamson said, noting that the Flames forfeited the 125-pound weight class last season. "Now, we're starting off on a high note with Tristan getting pins, which is awesome."

Gowen won his first match by forfeit and his final three by decision, the last by major decision.

"Michael really looked like he was turning a corner today," Williamson said. "He struggled a little bit to start the season, but his mind and his body were working together today, which was really encouraging to see from him because I know he's been putting in a lot of work to get there."

"That was vintage Amos," Williamson said. "He was pretty much impossible to score on."

Allen's only loss came to Otterbein's Drew Kasper, the No. 1-ranked heavyweight in NCAA Division III.

A few of the same Flames will compete again in Sunday's Star City Open, with those 16 team members who did not wrestle in Saturday's duals competing in the open tournament format. Liberty is one of only two NCWA programs in Salem this weekend, with Mid-Atlantic Conference rival Apprentice School the other.