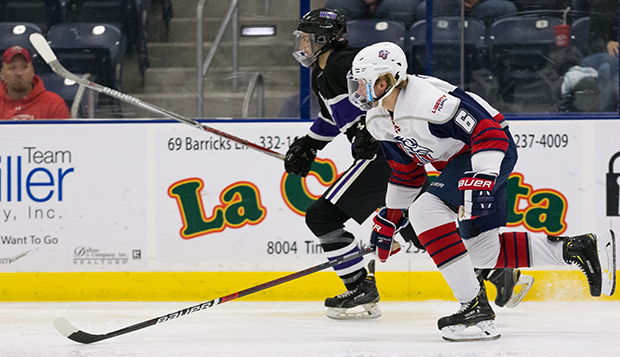 Senior defenseman Jacob Fricks chases the puck alongside an NYU player in a game last year. (Photo by Gabrielle Calhoun)

In a battle of unbeaten ESCHL opponents, Liberty University's ACHA Division I men's hockey team lost Friday night's opener by a 4-2 decision to New York University at the Sky Rink at Chelsea Piers.

NYU battled back from 1-0 and 2-1 deficits before seizing a 3-2 lead in the first minute of the third period and adding an empty-net insurance goal in the final 52 seconds.

"There was some pushback on our end, but we just didn't have our game tonight," Flames Head Coach Kirk Handy said. "It wasn't the performance we wanted tonight. We looked tentative out on the ice. We'll be a lot better (in Saturday's rematch)."

The Flames capitalized in the closing seconds of their first power-play opportunity, peppering the Violets with shots before senior forward Quinn Ryan worked a give-and-go with sophomore forward Arturas Laukaitis. Senior defenseman Jacob Fricks put away the rebound of Ryan's shot, blocked by NYU goalie Patrick Cavanaugh and left out in front, for a 1-0 lead.

The Violets tied the contest for the first time with 7:30 left in the first period when Scott Mulligan sent a short pass out of the left corner to linemate Alex Peck, who skated across the crease and sneaked his first goal of the season past Flames sophomore goalie Tyler Myers.

Just over three minutes later, Liberty reclaimed a 2-1 lead when junior forward Cole Gammer, cutting into the left crease, punched in the putback of senior defenseman Basil Reynolds' shot from the right point.

But NYU struck back to knot the game again in the opening minute of the second period when Brandon Ritchey finished a feed from fellow forward Kohl Donovan on a two-on-one breakaway.

Myers made a few clutch saves on a series of power-play opportunities by the Violets in the second period, preserving the 2-2 tie, before NYU seized its first lead by capitalizing on a power play midway through in the third. Mulligan skated the puck through the neutral zone and behind the cage before wrapping an assist around the right side to Peck, who put his second goal of the season, and on the night, away from point-blank range out in front.

With Liberty on a man advantage, junior forward Jordan Bochinski hit a crossbar with his shot from the left circle, but the Flames were unable to manufacture many more scoring chances, even on the five-on-three with 3:00 remaining in regulation.

Handy pulled Myers for the final 1:14 and Violets defenseman Andrew Williamson quickly cashed in with an empty-net shot from deep in his own zone, icing NYU's upset with 52 seconds to go.

"We had a bunch of power plays at the end, but just couldn't convert," Handy said. "We'll all regroup, coaches and players, and be ready to turn it around (on Saturday)."