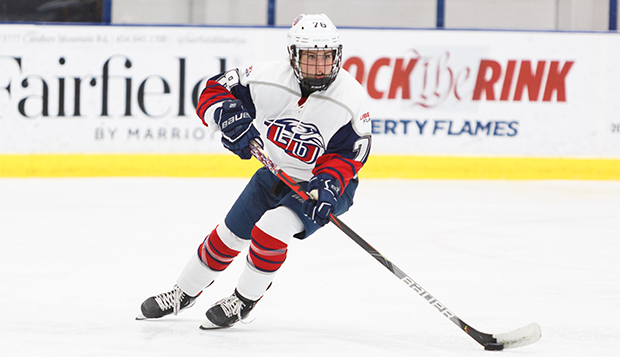 "It was just a dominating game and we needed it," Lady Flames senior forward Alex Smibert, who netted a hat trick and added an assist. "Everyone was firing on all cylinders, and all of our lines were working together. It was a fun game."

Liberty (16-2) outshot the Nittany Lions (3-6) by an 81-19 margin, and senior goalie Nadia Rupoli (8-1) made 19 saves to post her seventh shutout of the season and program-record 19th of her career. She lowered her ACHA Division I-best goals-against average  0.80 and raised her league-leading save percentage to 96.4.

Manchak started the scoring at the 18:18 mark of the first period when she dropped a no-look pass back to Truter in the left crease before skating behind the cage and one-timing the rebound of Truter's shot past Penn State goalie Lindsey Scott from deep in the right circle.

Liberty padded its lead to 3-0 with two goals in the final 2:15 of the opening period. First, freshman forward Brooklyn Pellizzari deftly deflected sophomore forward Aislyn Stretch's entry pass from the top of the left circle behind her back past Scott from out in front. Then, with 12 seconds remaining, senior forward Alex Smibert recovered the rebound of her own shot off the back boards and lifted a sharp-angled backhander into the top shelf, off the cup of Scott's glove.

A minute and a half into the second period, Truter stretched the Lady Flames' lead to 4-0 by taking a pass from senior forward Deena Birney, skating out of the right corner, and threading a backhand through traffic and the five hole of Scott.

Manchak, sneaking back door in the left crease, made it a 5-0 game with 8:12 left in the second period by one-timing a crossing pass from Smibert inside the left post. Then, at the 7:46 mark, Truter gathered a rebound and sent a pass back out to Stretch for a shot from the high slot that got past Scott, who was screened by a scrum in front of the cage.

Penn State forward Delaney Hucker was ejected from the game on the play after crosschecking Manchak to the ice in the left crease and kicking her while she was down.

With 2:55 left on the five-minute major, Lady Flames senior forward Aly Morris received an entry pass from Manchak in the right crease and lifted a sharp-angled wrist shot into the upper netting for a 7-0 lead. Then, with 1:15 to go on the power play, Birney extended Liberty's advantage to 8-0 at the 4:00 mark of the second period off an assist from junior defenseman Sydney Pierce.

"We just had to bear down on the power play and once we got one, the floodgates kind of opened up," Smibert said.

In the final minute, with the Lady Flames back on the power play, Rupoli made a kick save of a shorthanded breakaway opportunity by Penn State forward Crosby Deliman.

Just 16 seconds into the third period, Liberty stretched its already commanding lead to 9-0 when Truter finished fast-break feeds from Manchak and Polson with a point-blank shot into the top-left corner from deep in the left crease. With 11:15 to go, Smibert received a pass from senior forward Vanessa DeMerchant and rifled a shot from the right circle past Scott, extending the Lady Flames' advantage to 10-0.

"Vanessa and Shelby (Bradford) and I talk a lot and have really good chemistry on the ice and it's paying off," Smibert said.

Finally, with 1:43 to play, Smibert took an entry feed from Morris and capped the scoring with a point-blank finish from deep in the left crease.

"We just finished them off and made a statement," Smibert said.

Next Friday at 6:30 p.m. and Saturday at 1:30 p.m., the Lady Flames will conclude their fall semester schedule by hosting eighth-ranked Miami (Ohio), which won three ACHA DI national titles from 2014-17.

The Nittany Lions will face Liberty's ACHA Division II team, 9-0 and ranked first in the Southeast Region in this week's first ACHA DII national rankings, on Saturday at 1:10 p.m. back at the LaHaye Ice Center.