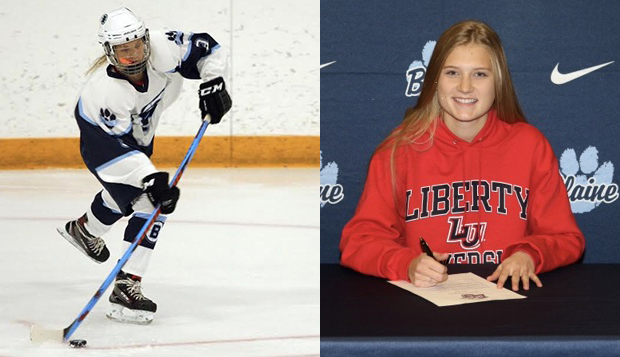 Liberty University's ACHA Division I women's hockey team, which debuted at No. 1 in this week's first national rankings, recently signed its fifth recruit for the incoming Fall 2020 class — Brityn Fussy, a forward from Minneapolis.

"We are very excited to have Brityn joining our program next Fall," Lady Flames Head Coach Chris Lowes said. "She is a talented hockey player and we are glad she chose Liberty. Brityn is our third forward commit for next season and with the potential of graduating five forwards, she is a much-needed asset. We feel very good about how next year's class is shaping up."

A senior captain and top returning scorer on her Blaine High School team, Fussy is versatile enough to play at center or on the wing. She joins Carlie Foxhoven from Dallas and Abbey Mills from Ontario as incoming forward recruits to date.

Fussy made her official visit in late October and immediately sensed Liberty was the place the Lord called her to continue her hockey career while pursuing a degree in accounting or computer science in Liberty's School of Business, which opened a new building this fall.

"I chose Liberty because the second I got there I felt that God was telling me that this was the place I needed to be," she said. "God has a plan for me and I know that it is to attend Liberty and to be with people who have the same beliefs. Everyone was super welcoming and made me feel like I belonged there. It felt like a second home just walking around campus and seeing the values the university has."

As a player, Fussy, who has also trained with the Minnesota Advancement Program (MAP), brings a passion for the game and is blessed with excellent vision and speed.

"I see myself as a smart and fast hockey player," she said. "I see the ice and know what to do in most situations. By utilizing my speed, I hope to be a playmaker on the team and to show my work ethic next year."

In watching her play, Lowes was impressed by Fussy's tenacity in fighting for loose pucks as well as her passing and scoring touches.

"Brityn is a well-rounded hockey player that skates well, wins battles, and can put pucks in the net," he said. "I really like that she can be a playmaker when needed, but also has a desire and willingness to play with grit and toughness. We need players like that to win games against some of the top teams in our league."

She looks forward to developing her playing style as well as friendships within the team.

"I am most excited for the experience of playing at a higher level of hockey and improving as a player and person, and to create bonds with others and be a part of a second family with my coaches and teammates," Fussy said.

That holistic approach to developing players athletically, academically, spiritually, and socially is what Lowes strives to instill in all of his players.

"Brityn is not just a good athlete, she is the type of person we want on our team –  one that will be a successful student and good teammate," he said.