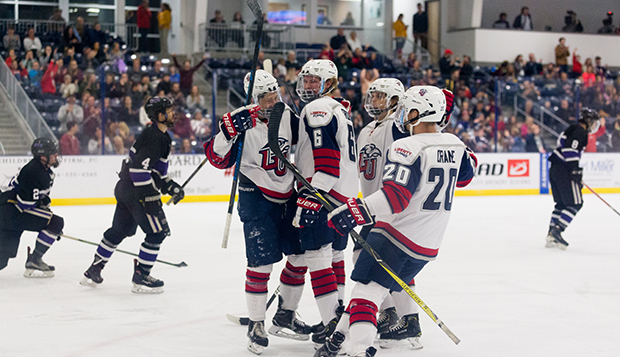 Liberty celebrates a goal in its 7-3 victory over NYU, Oct. 19, 2018, at the LaHaye Ice Center. (Photos by Gabrielle Calhoun)

Liberty University's ACHA Division I men's hockey team will make the first of two consecutive weekend road trips to the Big Apple this Friday and Saturday night when the Flames challenge New York University in a showdown between the last two undefeated teams in the ESCHL.

The series will be played less than a mile from Times Square at the Sky Rink at Chelsea Piers, overlooking the Hudson River, starting at 9 p.m. both nights.

Liberty, featuring a cast of players who have proven themselves ready for prime time, is out to its best start in 10 seasons, coming off its first-ever sweep of Ohio in nine regular-season series.

The Flames moved back up from No. 8 to No. 6 in this week's ACHA DI computer rankings after sweeping their home series against No. 9 Ohio, routing the Bobcats in the "Midnight Mayhem" opener, 8-2, before rallying from a 3-0 third-period deficit to win the rematch, 5-4 in a shootout.

"It gives us some good energy going into next weekend's series at NYU," said Liberty senior forward Quinn Ryan, who scored the tying goal in regulation and the first shootout goal in Game 2 against Ohio. "We're excited. We need to build off that."

"We're taking strides in the right direction and at this point in the year, we're hoping to get better every game," Flames Head Coach Kirk Handy added.

Interestingly, Liberty suffered a 5-4 setback in its first-ever meeting with the Violets at the DI level, Nov. 17, 2017, at the Sky Rink, after letting a 3-0 lead slip away.

The Flames will return to the Empire State next weekend for a series at Syracuse, a team they swept Oct. 18-19 at the LaHaye Ice Center, after losing to the Orange in last year's ESCHL Championship game.

All-Time Series: After splitting their first series at the DI level in 2017, the Flames swept all four meetings with the Violets last season — the last three by 5-0 finals — to seize a 5-1 series lead.

Liberty Scouting Report: Both teams have experienced similar success in their special teams play, with Liberty holding a slight edge (26.6 percent to 24.0) in power-play conversions and the Violets a narrow lead (83.1 percent to 82.8) in penalty kills. Whereas NYU has only outscored opponents by a 37-34 margin, the Flames hold a commanding 86-29 advantage.

Between the pipes, Liberty has platooned freshman Cédric Le Sieur (6-1, 1.87 goals-against average, 92.2 save percentage) and sophomore Tyler Myers (7-1, 1.97 GAA, 91.6 SP, two shutouts), with both enjoying sensational rookie seasons for the Flames. They rank ninth and 10th, respectively, in goals-against average among ACHA DI goalies who have logged at least 200 minutes.

New York Scouting Report: After finishing 5-15 in ESCHL play last season, the Violets are off to a 4-0 start against conference opponents this fall. NYU has had game-winning goals from five different players. Forwards Mac Brice (5G, 5A) and Frankie Horowitz (6G, including four on the power play, 3A) pace the attack along with defensemen Reagan Wortz (4G, 5A) and Aidan Wright (3G, 6A).

In goal, Patrick Cavanaugh (5-2, 2.47 GAA, 93.1 SP) has played the majority of the minutes and experienced the most success.

Coaches: Handy is in his 20th season as Liberty's head coach and has compiled an overall record of 445-182-29. Chris Cosentino is in his 10th season at the NYU helm and third year coaching them at the DI level, where he has led the Violets to a 31-30-4 record after guiding them to a 139-66-8 mark as a DII team.