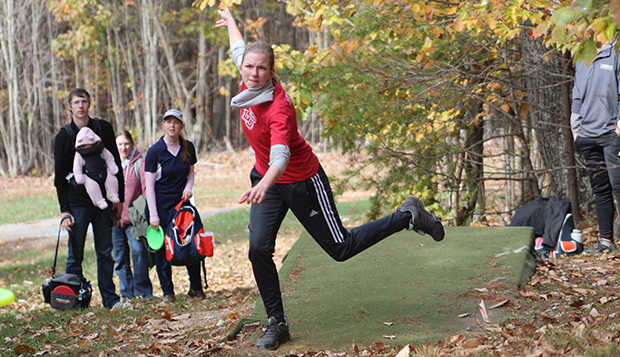 Freshman Justin Rosak was the overall winner with a 7-under-par 56 total followed by senior Dustin Barrett and freshman Stephen Curry (2-under 61). Sophomore Spencer Ellingson (1-over 64) and junior Trevor Staub (3-over 66) rounded out the Flames' top five.

The event was played on Liberty's 20-hole East Campus and Hydaway Outdoor Recreation courses on Saturday and Sunday, respectively.

Clemson (187) came in third at the Flamethrower, followed by Western Kentucky (193), East Carolina and Eastern Mennonite (tied for fifth at 194), and Appalachian Bible College (ABC, 228).

"It was a good-sized field, a good overall environment, and I was pleased with how they did," Liberty Head Coach Steve Bowman said, noting that the Flames earned one of three bids to this season's NCDG Championships along with Clemson and Western Kentucky. "All of our guys played well, even our second guys group."

The Flames' second foursome totaled 203 to tie with Western Kentucky's B team for second place, one shot off the pace of NC State's B squad (202).

Grace Adkins was the overall women's medalist with a round of 70, followed by fellow senior Shannon Hons (78) and junior Olivia Hayes (79).