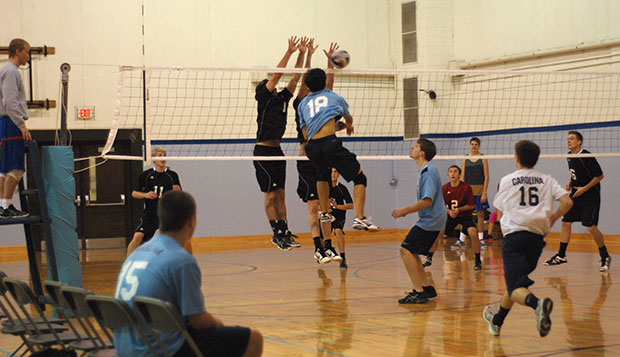 For the second time in three weekends, Liberty University's men's volleyball team traveled to N.C. State on Saturday to officially open its spring season of competition in the South Region of the Eastern Intercollegiate Volleyball Association.

The Flames, a Division I team, had faced three of their four opponents in the round-robin tournament over the previous two weekends, including Virginia Tech, the No. 3-ranked team in the most recent National Collegiate Volleyball Federation men's club volleyball poll.

"That's going to change," Liberty head coach Bryan Rigg said of the Hokies, who the Flames had met the previous Saturday at James Madison University. "JMU won the tournament."

Sophomore outside hitter Derek Abildness paced the Flames' attack with 18 kills and nine blocks. Sam Eisbrenner, a 6-foot-6 freshman, had a total of 13 blocks and added nine kills while senior right-side hitter Ethan Chase contributed 21 kills (5.25 per game), including nine against UNC and eight against Duke, as well as nine digs. Freshman libero Josiah Williams anchored Liberty's defense with 24 digs.

Liberty is off this weekend but will practice three times next week before traveling to a tournament at the University of Tennessee on March 2, when Rigg is expecting the Flames to face a variety of teams they have yet to play this season, many from the Midwest, including schools from Missouri and Indiana.

Liberty is looking forward to hosting as many as 16 teams from the South Region at the March 22-24 EIVA championship tournament in the new Schilling Center.

"Everything leading up to it is for seeding," Rigg said, noting the top two teams in Division I and II of the South will go on to play in the East Coast Championships, March 29-31 at the University of Maryland.