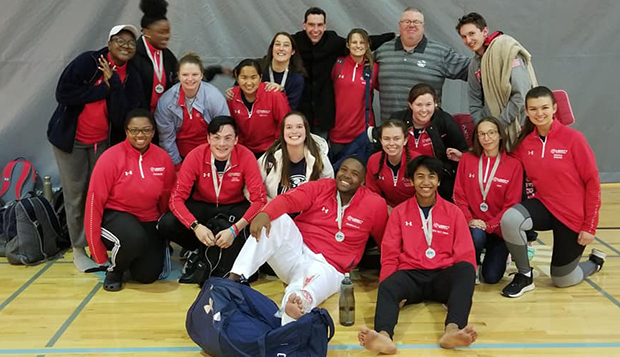 Liberty University's taekwondo team is off to a strong start with impressive showings at its East Coast Taekwondo Conference (ECTC) opener at Cornell University last Sunday in Ithaca, N.Y., and its Atlantic Collegiate Alliance of Taekwondo (ACAT) debut this past Saturday at UNC Chapel Hill.

The Flames and Lady Flames placed second overall among Division III programs at Cornell, behind only Johns Hopkins, before placing third at North Carolina with three of their teams earning gold medals.

In the ECTC event, Liberty had four of its teams advance to the quarterfinal round, with its women's Intermediate foursome of junior Sarah Rotter and graduate Gena Shlabach (both heavyweight green belts), sophomore Lauren Western (middleweight blue belt), and senior Teagan Molinets (lightweight blue belt) going on to a third-place finish.

At UNC, Liberty was one of the smallest teams out of the five schools in the competition. The event drew nearly 100 athletes to Chapel Hill, N.C. The Flames and Lady Flames still managed to place third with 27 points behind powerhouse Duke (47) and the host Tar Heels (40), ahead of American and Virginia Tech.

"They did team competition in all the events and we didn't have anyone ranked in Poomsae, which is what killed us," Liberty Head Coach Tom Childress said.

"We took all of the matches down to the wire, with a couple finals decided in the gold (sudden death) point," Childress said. "That was very stressful, and it gave me heart palpitations. The guys were pushed to their limits. It was really good competition all around, and all of the competitors were so fired up."

He was pleased with the team's overall performances and attitudes on and off the mats.