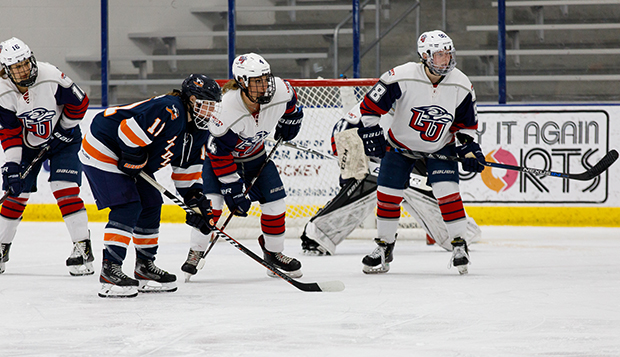 Despite dominating in the shot department, Liberty University's ACHA Division I women's hockey team got off to a slow start in its third and final game of the Robert Morris Showcase, Sunday afternoon against the host Eagles. Tied 1-1 after the first 20 minutes, the Lady Flames (15-2) scored the last eight goals unanswered to emerge with a 9-1 win and finish at 2-1 for the weekend.

Morris started the scoring early in the first period with a goal off assists from Machholz and senior defenseman Emily John, but the Eagles answered with the equalizer in the final 1:08 of the frame, spoiling the shutout bid of Lady Flames freshman goalie Kayla Savoie-Penton (three saves).

Vanessa DeMerchant lifted Liberty to a 2-1 advantage that it would not relinquish by putting away a second-period assist from fellow senior forward Alex Smibert. Machholz provided some separation with her first goal, set up by junior forward Danica Polson, extending the Lady Flames' lead to 3-1 before senior defenseman Dana McLeod boosted it to 4-1 by finishing a feed from DeMerchant.

Bradford scored the first two goals of the third period — the first off assists from sophomore forward Aislyn Stretch and John and the second off a feed from Smibert — when Liberty padded its 4-1 lead.

Morris converted an assist from McLeod for her second score before Machholz netted her second goal, set up by Polson and Morris. Sophomore forward Lexi Paulmert completed the scoring off an assist from freshman forward Yannick Truter.

The Lady Flames will return to the LaHaye Ice Center this Friday at 6:30 p.m. to take on Penn State (3-4) in a single game that will start a seven-game homestand, closing out the fall semester with a series against Miami (Ohio) on Nov. 22-23.