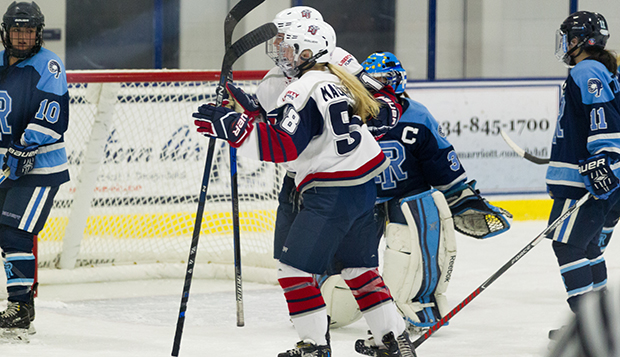 A day in downtown Chicago, exploring the waterfront on Lake Michigan in the morning and the NHL's Chicago Blackhawks' practice facility in the afternoon, helped refresh Liberty University's ACHA Division I women's hockey team, which responded to Friday night's second loss to Lindenwood Bellville with a 9-0 rout of Rhode Island, Saturday night at The Edge Ice Arena.

"It was our third time playing Rhode Island, so we knew what to expect and we felt like we controlled the game for the most part," Lady Flames Head Coach Chris Lowes said. "It was good to get back on the ice and try to bounce back after (Friday night's) loss. Sometimes, it's about more than hockey. It was good to get back on the winning side of things and have a little fun off the ice before getting a good result on the ice."

Senior goalie Nadia Rupoli posted her sixth shutout of the season and program-record 18th of her career, improving to 7-1 to match the record of freshman Kayla Savoie-Penton, who sustained her first setback on Friday.

"Our defense did a good job of limiting their opportunities," Lowes said.

The Lady Flames opened a 4-0 lead by the end of the first period after outshooting the Lady Rams 20-3 en route to a 63-14 margin in the final shot totals. Liberty's power play converted three of its four chances on the night and sophomore forward Grace Machholz distributed five assists.

The Lady Flames netted their first power-play goal by freshman Brooklyn Pellizzari, who finished a feed from senior defenseman Emily John before Polson capitalized on an assist from Machholz. Morris capped the first-period scoring with her second goal, set up by Machholz and Polson.

Senior defenseman Dana McLeod netted the only goal of the second period off a pass from senior forward Vanessa DeMerchant.

John capped the scoring off assists from freshman forward Val Manchak and Gibson.

Liberty will conclude action in the Robert Morris (Ill.) Showcase with its third game of the weekend, against the host Eagles at noon (EST).