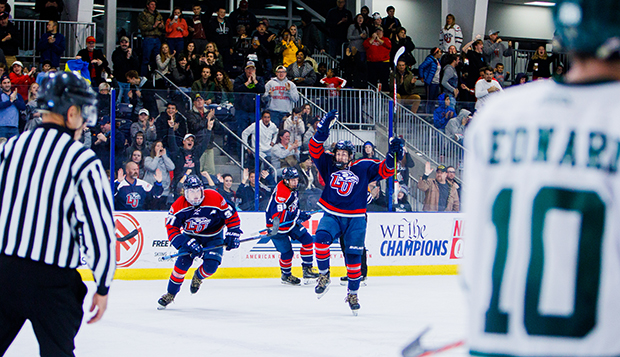 Liberty celebrates the go-ahead goal against Ohio in the third period of Saturday night's rematch. (Photos by Ellie Richardson)

Good things come to those who work hard while they wait, as Liberty University's ACHA Division I men's hockey team proved in Saturday night's rematch with Ohio before another nearly packed house and electrically charged crowd at the LaHaye Ice Center.

A night after blowing out the ninth-ranked Bobcats (7-2-3) in a "Midnight Mayhem" opener, the No. 8 Flames (13-2-1) overcame a 3-0 deficit by scoring four consecutive goals in the third period before pulling out a 5-4 shootout win.

"We just had faith in our team," Liberty senior forward Quinn Ryan said. "It was definitely a late night for both teams, but we had a job to do and we went out and did it. We know that we're a third-period team and we knew we had it in us the whole time. We just had to go out with confidence."

"When we started working hard again, the bounces started going our way a little bit," Liberty Head Coach Kirk Handy said. "We didn't have our best game at the start tonight, but it is encouraging that our guys go down, 3-0, and battle back to tie the game up and pull ahead. It's a real good test of who we are as a team."

Ohio senior goalie Jimmy Thomas, the Bobcats' career shutout leader with 17, repelled numerous high-quality scoring chances by the Flames in the first period, and sophomore goalie Tyler Myers held his own on the other end, making several key saves.

With 1:34 left in the first period, Ohio snapped the scoreless tie on the power play when defenseman Jacob Houston sent a crossing pass to forward Kyle Craddick, who jammed the puck past Myers on a third try from point-blank range for a 1-0 Bobcats lead.

Ohio doubled its edge at the 11:02 mark of the second period, with forward Drew Magyar sparking a fast break with a pass to Craddick through the neutral zone before he sent it ahead to Wells who finished a rebound from behind the cage off the skate of Myers and inside the right post.

Then early in the third, the Bobcats capitalized on an untimely exchange to add another goal, this time on a breakaway by second-leading scorer Gianni Evangelisti, who chased down a loose puck along the Flames' bench and beat Myers one-one-one with a top-shelf backhand.

After a few missed chances on the power play, including a glove save of a shot by Ryan, and a short-ranged shot by senior forward Josh Hamilton that clanged off the crossbar, the Flames rallied for three goals in 44 seconds to force a 3-3 tie.

"It was a good third period," Ryan said. "They got one right away in the third which was a dagger, but we knew what we had to do. We put the puck in the back of the net and came out with the win."

Senior forward Brock Thompson started the comeback off assists from freshman defenseman Colin Baird and sophomore forward Matt Bartel on the left endline and sliding a sharp-angled shot off a defenseman's stick and into the net at the 9:45 mark, trimming the deficit to 3-1.

Eighteen seconds later, senior forward Victor Blomberg and junior forward Jordan Bochinski forced a turnover in the Bobcats' defensive zone and junior forward Cole Gammer pounced on the puck in the high slot and deked in front of Thomas before tucking his shot behind him, shaving Ohio's lead to 3-2.

When Ryan finished a two-on-one break with sophomore forward Josh Fricks by slamming the putback of his shot from the right side into the net from deep in the left crease, tying the game at 3-3, the Military Appreciation Night crowd responded with as much rejoicing as fans on hand for the Midnight Mayhem matchup had in the early-morning hours.

"Josh made a good move and threw the puck on net to the far, low pad and I was fortunate to have it pop right out to me and I put it in," Ryan said.

Moments after a critical penalty kill, with Bochinski serving two minutes for slashing, he came out of the box and converted the go-ahead goal, putting away the puck on a two-on-one rush with Gammer a split second before being checked into the back boards.

But the Bobcats bounced back to net the equalizer at the 1:49 mark with defenseman Timmy Thurnau firing a high-percentage wrist shot through traffic in the slot.

Early in the five-minute, three-on-three, sudden-death overtime period, Myers blocked a one-timed shot by Evangelisti at the left post off a crossing pass. Moments later, Ryan was denied by Thomas on a breakaway opportunity after receiving a long outlet pass from senior defenseman Chaydan Lauber.

Myers blocked a final shot by Evangelisti with 13.7 seconds remaining and one by Houston with 1.4 seconds to go, preserving the tie and setting up the shootout.

Ryan went first for the Flames, finishing with an incredible swoop move and diving stab past Thomas, who had won his previous four shootouts.

"I just tried to sell the backhand and then cut forehand and I slipped a little bit or he got my stick and I fell, I don't know, but it went in," Ryan said.

Evangelisti answered by calmly approaching the cage at a slow pace and firing a high-precision shot from point-blank range.

After misses on the next two rounds by both teams, Thompson put the Flames back on top with a wrist shot into the top-right corner of the cage before Thurnau misfired on Ohio's final attempt in front of Myers, clinching the dramatic victory.

"We've played them every year since I've been here," Ryan said. "This is my fourth year and this is the first year we've swept them, so it feels good. The crowd was really getting into it both nights and it really helped us push along and dig deep in the third."

"It was an exciting game, for sure, almost too exciting," Handy added. "In three-on-three hockey in overtime and in a shootout, anything can happen. It was unbelievable."

Liberty will travel to play two more late-night games at ESCHL rival New York University next Friday and Saturday, with the puck dropping at 9 p.m. both nights.

"We're taking strides in the right direction," Handy said. "We're going to get back to work Monday and keep the train moving forward here." 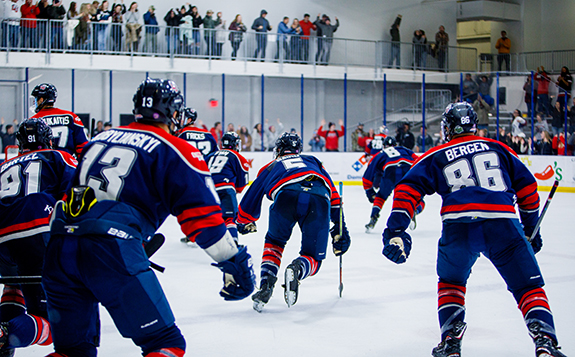 Liberty players stream off the bench and onto the ice to celebrate the 5-4 shootout victory.