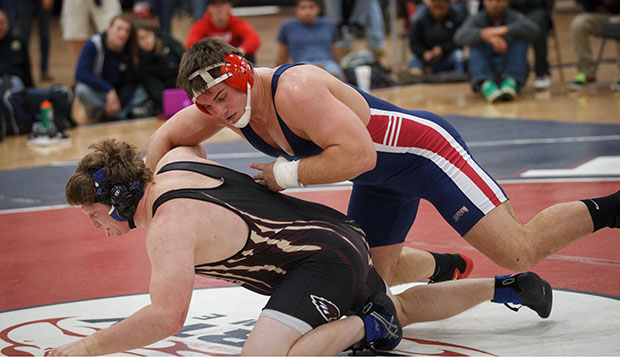 Competing in its first home meet of the year, Saturday afternoon at the new Schilling Center, Liberty University's wrestling team swept three of the same opponents it will be hosting on the same mats in the Mid-Atlantic Conference tournament on March 2.

"They were good teams, strong teams, but we were better conditioned," said Liberty assistant coach Scott Clymer, filling in for head coach Jesse Castro, who was on a recruiting trip to watch the Virginia Independent Schools state tournament near Richmond. "Our positioning and persistence were way stronger and it was a little too much for them to handle."

He said several wrestlers who hadn't been available in recent meets came through and competed well for the Flames, even in some losses.

"Trevor McGlynn got disqualified for being too aggressive," Clymer said of his 157-pound match against VMI's Spencer Buettner. "The ref threw them both out, but Trevor was just an animal."

Then, at 174, Jonathan Perkins and Keyshaun Ward both exceled, with Perkins earning a 2-0 decision over JMU's Faith Ntiundi and needing just 42 seconds to pin VMI's Maxwell Cromier. Ward scored two major decisions — 9-1 over Bridgewater's Scott Fike before bumping up to 184 and recording a 10-1 triumph over VMI's Skyler Kepley.

"Andrew Wilson looked great at 235," Clymer said. "He's kind of been our workhorse all year long. He's solid and doesn't make mistakes, and he's always going for more points. He has a hunger and a drive you kind of wish you could put into every one of our wrestlers."

Finally, at heavyweight, Josh Travers, a mid-semester transfer from California who has moved into Wilson's spot, came from behind with an escape and takedown to score a 6-4 win over Bridgewater's Daniel Siler before picking up his second forfeit win against VMI.

"He's been working out with Andrew Wilson a lot," Clymer said. "He's putting everything he has into it and the results are finally showing."

Clymer, the Flames' defending NCWA 141-pound national champion,  believes Liberty will be ready to defend its MAC title and qualify as many individuals for nationals as possible in two weeks.

"The team's coming together at the right time of the year," he said. "We've got qualifiers coming up and they guys are just clicking, coming back from some injuries. The pieces of the puzzle are starting to come together at the perfect time."

The top five individuals in each weight class advance to the March 14-16 nationals in Allen, Texas. Last year, the Flames won the MAC tournament and sent 14 wrestlers to nationals in Daytona Beach, Fla., where they placed third as a team.