Flames liven up the late-night crowd by burying Bobcats, 8-2 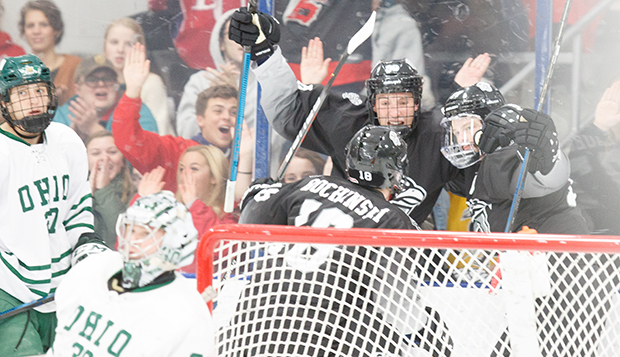 Backed by a boisterous College For A Weekend (CFAW) crowd on its second "Midnight Mayhem" matchup of the semester, Liberty University's eighth-ranked ACHA Division I men's hockey team scored two goals in the first 29 seconds and five more unanswered over the final 20:25 to surge past ninth-ranked Ohio, 8-2, early Saturday morning at the LaHaye Ice Center.

"What a fun night and a fun fan base to play in front of," said freshman defenseman Colin Baird, who assisted the Flames' first goal in the third period and scored the next two as Liberty broke open a 4-2 contest. "We were feeding off energy from the crowd. It was awesome."

"Ohio's a very strong program and I give our guys a lot of credit," Liberty Head Coach Kirk Handy said. "Our guys worked hard tonight and played well. We battled for 60 minutes."

The Flames (12-2), sporting black sweaters, struck first, just after the stroke of midnight.

Twenty-one seconds after the opening faceoff, senior defenseman Chaydan Lauber skated the puck through the neutral zone before launching a spectacular wrist shot from the top of the left circle into the top left corner of the cage past Ohio goalie Jimmy Thomas for a 1-0 Liberty lead.

Eight seconds later, after winning the ensuing faceoff, senior forward Quinn Ryan set up sophomore forward Arturas Laukaitis, the Flames' third-leading scorer, with a beautiful cross-crease assist for a one-time, top-shelf finish from inside the left circle, doubling the advantage to 2-0.

"The energy and the atmosphere was fantastic tonight and the quick start was great," Handy said. "It was just a matter of time with Art (Laukaitis). He had a great game tonight."

With 7:46 remaining in the first period, the Bobcats trimmed the deficit to 2-1 on a shot from the point by Scott Bagby deftly tipped past Flames freshman goalie Cédric Le Sieur by fellow defenseman Thomas Pokorney as he skated through the slot.

Liberty capitalized on a quick counterattack with 14:09 left in the second period when junior forward Jordan Bochinski dropped the puck back to junior forward Cole Gammer in the slot, where he ripped a wrist shot past a screen set by Bochinski barely inside the left post for a 3-1 advantage.

Ohio cut the gap to 3-2 at the 6:38 mark when forward Andrew Wells received the puck off the faceoff at the top of the left circle and flung a wrist shot that deflected off Le Sieur's glove into the net.

Seconds after another shot by Wells off a faceoff in the Flames' defensive zone ricocheted off the glass and was cleared up the left wing, sophomore forward Josh Fricks chased down the puck and sent a backhanded feed to Laukaitis in front. He maneuvered around Thomas for an easy finish in the right crease, extending Liberty's lead to 4-2 just 25 seconds before the second intermission.

In a third period that featured plenty of offensive fireworks and fisticuffs, Ohio came out firing and Le Sieur answered the call, saving all 11 of the shots he faced, including a diving stop of Gianni Evangelisti's point-blank shot in the left crease.

"That was a big save for Cédric when he reached back in the net, maybe the turning point in the game," Handy said. "Our penalty kill was great tonight. We've really been focusing on that and (Assistant Coach) Jonathan Chung has been working hard for us on that and the guys responded well."

Five minutes later, Le Sieur glove-saved J.T. Schimizzi's shot on a two-on-one opportunity for the Bobcats. Then, Liberty capitalized on a two-on-one fast break of its own, sparked by Baird. He sent a cross-ice outlet to Bochinski who sprinted up the left wing before working a give-and-go with Baird for a finish in the left circle, padding the lead to 5-2 with 9:02 to go.

Just 1:15 after that, Baird netted the Flames' sixth score by skating from the top of the left into the right circle and shedding two defensemen before rifling an unassisted, uncontested wrist shot past Thomas.

"Colin doesn't get a lot of attention back there, but he plays such an effective game for us," Handy said. "The offensive side of his game has started to blossom the past four or five games and he's going to be a key player for us."

Baird received assists from Laukaitis and Fricks and sniped his shot from inside the left circle into the top left corner of the cage with 2:40 remaining. That stretched Liberty's lead to 7-2 and moved him into a tie with senior forward Brock Thompson for seventh among the team's scoring leaders with four goals and eight assists.

"It was time to put (the Bobcats) away and I think we did a good job as a team," Baird said. "We wanted to bury them and we did and it will play into (Saturday night's rematch), as well. They've taken advantage of us before and it was good that we were able to set the tone for the rest of the series."

After an altercation that resulted in six roughing penalties and two disqualifications for fighting — assessed to Flames senior defenseman Garrett Nelson and Ohio leading scorer Tyler Harkins — Fricks capped the scoring on the power play at the 1:08 mark. He collected the rebound of a shot by senior defenseman Jacob Fricks and finished a sharp-angled shot from deep in the left crease.

Liberty outshot the Bobcats 42-28, but only converted on one of five power-play opportunities.

"We're going to have to play better (Saturday)," Handy said. "We've got to hit the reset button when the guys leave the rink. We want to come back focused and ready to go (because) Ohio's going to give us everything they've got."

The puck will drop at 7 p.m.  for the rematch back at the LaHaye Ice Center on Military Appreciation Night, with active service members and military veterans receiving free admission. The game will be webcast live by the Liberty Flames Sports Network (LFSN) and carried on ESPN+. 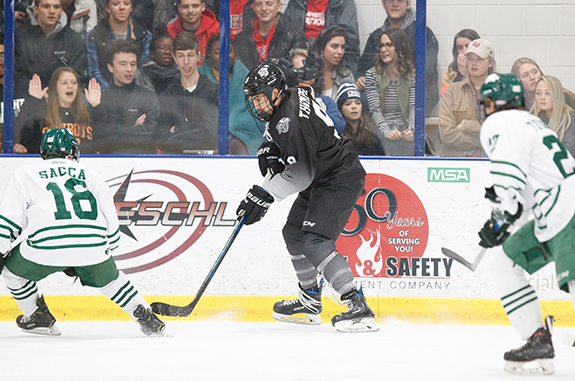 Senior forward Brock Thompson, in black, skates between two Bobcats along the boards