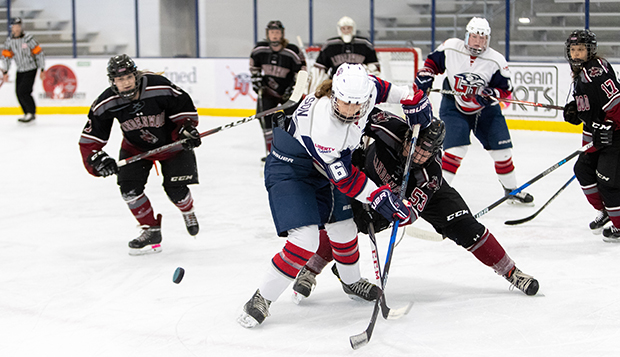 Despite outshooting the Lynx, 40-25, and winning more faceoffs, in the opening game of the Robert Morris (Ill.) Showcase, the Lady Flames (13-2) sustained their second loss of the season, both at the hands of Lindenwood-Bellville (10-2) — the first on its home ice near St. Louis on Sept. 28 and Friday night just outside of Chicago.

"They won the season series tonight, 2-1," Liberty Head Coach Chris Lowes said. "They established themselves as the team to beat, and we are disappointed. We were excited about the rematch and to avenge our only loss, but we made some mistakes tonight and they capitalized. They're a high-energy, hard-working team, and they did certain things better. They blocked more shots, had more control with the puck, and made better decisions."

After a scoreless first period, Lynx forward Megan Norris broke the ice just over a minute into the second by putting a putback past Lady Flames freshman goalie Kayla Savoie-Penton (22 saves) for a 1-0 advantage.

The Lady Flames seized a 2-1 lead later in the second period on a breakaway by senior forward Alex Smibert off assists from freshman forward Val Manchak and senior defenseman Emily John.

However, the Lynx netted the tying and go-ahead goals in the third, both by defensemen off shots from the point. Jamie Riselay scored the equalizer before Jess Walker notched the game-winner moments later with less than 14 minutes remaining in regulation.

The Lady Flames will face Rhode Island in Saturday's second game of the showcase, set for 5:30 p.m. (EST), before concluding with a noon showdown with the host Eagles on Sunday.