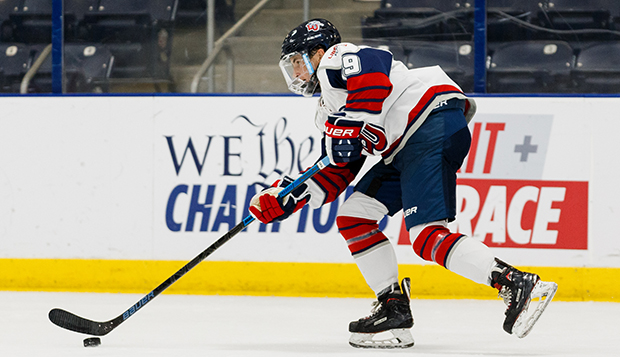 Freshman forward Luke McFarlane is one of 10 Flames in double digits in points with nine goals and seven assists through 13 games. (Photo by Ellie Richardson)

The Flames are off to their best record through 13 games in three seasons under Head Coach Ben Hughes. Liberty began the 2016-17 season, its last under Chris Lowes before he became head coach of the Lady Flames' ACHA DI squad, at 13-0 en route to a runner-up showing at the ACHA DII National Championships.

They earned a 12.23 computer ranking, second only to defending ACHA DII national champion Florida Gulf Coast University (12.93) and ahead of No. 3 Cincinnati (11.01), a team Liberty edged, 4-3, Oct. 26 near St. Louis in the second game of a three-game showcase at Lindenwood University.

Liberty can avoid having to play in the Southeast Regional tournament — where it was eliminated by North Carolina State in the second round last year — and clinch an autobid to the March 19-24 national tournament in Frisco, Texas, by remaining in the top two in the final regular-season rankings. The Wolfpack are the only team to defeat the Flames this season, 5-3 on Oct. 13 in Lynchburg, Va.

This weekend, Liberty is hosting reigning ACHA DIII men's hockey national champion Sault (Ste. Marie, Ontario) College on Friday at 7 p.m. and Saturday at 1:30 p.m. at the LaHaye Ice Center. The Cougars are off to an 11-2-1 start and ranked first in the Central Region in their first season of competition at the ACHA DII level.