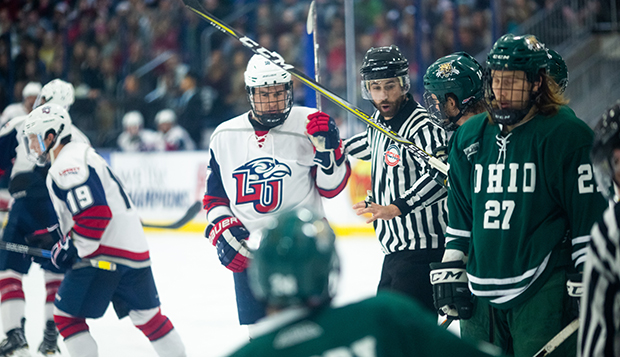 Junior forward Jordan Bochinski contends with the Bobcats in the teams' last meeting, a Nov. 9-10, 2018, series split at the LaHaye Ice Center. (Photos by Nathan Spencer)

The almost mystical phenomena known as "Midnight Mayhem" returns to the LaHaye Ice Center this Friday night when Liberty University's ACHA Division I men's hockey team hosts Ohio University, one of its biggest nemeses, in the first of a two-game non-conference series.

"It's going to be playoff-level intensity," said Flames sophomore goalie Tyler Myers, who started Liberty's first midnight matchup, a 6-0 shutout of IUP. "Midnight's always the biggest stage, so we know Ohio's going to be coming in with their best game. We've got to come with our best game and that starts at practice this week. We've just got to work hard like we have been and if we play our game as a team and worry about ourselves and not anybody else, we can win every game we play. I truly believe that."

Myers said Liberty's home crowd, especially when the contest coincides with College For A Weekend (CFAW) as this one does, is typically raucous, reveling in the late-night-approved excitement on the ice.

"The crowd here is enormous for us, the energy that they bring," he said. "You can feel it throughout our team, like when somebody makes a big hit or makes a big move, everyone goes out their next shift and they want to make the crowd make their loudest roar. The crowd's huge for us. It's definitely an advantage that not many teams have."

The Flames have won their past five Midnight Mayhem matchups, dating back to a 7-5 setback against Alabama on Sept. 30, 2016.

Liberty has outscored opponents by a 73-23 margin this fall, paced by sophomore forward Josh Fricks (14 goals, 12 assists), who completed his third hat trick of the season in last Friday's 7-3 triumph over ESCHL rival Stony Brook, and senior forward Quinn Ryan (6G, 18A). Sophomore forward Arturas Laukaitis (5G, 11A), senior defenseman Garrett Nelson (4G, 12A), and junior forward Jordan Bochinski (6G, 9A) have also made sizable impacts on the offensive end.

Ohio Scouting Report: The Bobcats, who opened their season with series sweeps against John Carroll, Toledo, and Robert Morris, have lost three in a row after splitting a home series against Iowa State and suffering back-to-back shootout losses (4-3 and 3-2) to No. 2 Michigan-Dearborn this past weekend at Bird Arena. Still, their strength of schedule helped them rise four spots in this week's rankings.

Ohio's offense, which has outscored opponents by a 49-22 margin, is sparked by forwards Tyler Harkins (13G, 15A) — who has converted a team-high three power-play goals — and Gianni Evangelisti (9G, 13A), who had four points against Michigan-Dearborn. Defenseman Jacob Houston has distributed 12 assists and forwards Andrew Sacca and Ryan Higgins both have netted five goals and four assists.

Coaches: Kirk Handy is in his 20th season as the Flames' head coach and has compiled an overall record of 443-182-29. Cole Bell is 7-1-2 in his first season at the helm for the Bobcats, after replacing veteran Head Coach Sean Hogan.