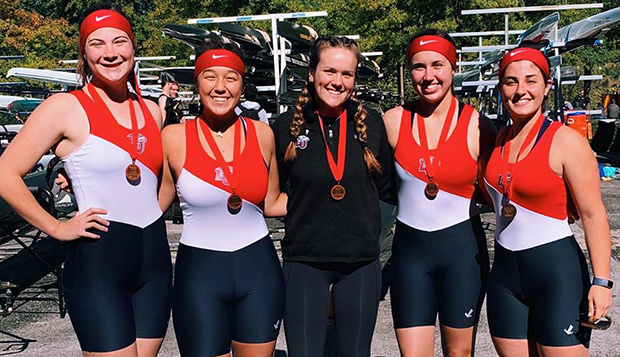 Liberty's women's Varsity 4 team celebrates with its bronze medals on the dock after Saturday's Head of the Hooch.

Liberty University's women's Varsity 4 crew rowed to a bronze medal at Saturday's Head of the Hooch regatta in Chattanooga, Tenn., highlighting the team's second-to-last road trip of the fall season.

Senior Victoria Drumheller, sophomores Morgan Schaible and Lindsey Bicknell, junior stroke Joanna Moran, and freshman coxswain Morgan Epling placed third out of 40 boats in Saturday's College and Club Varsity 4 final, completing the 5,000-meter course in 18 minutes, 4.1 seconds. The Lady Flames finished behind only Georgia Tech (17:30) and Clemson (17:50.5), and only a second in front of fourth-place Florida (18:05.2).

"That was a very strong finish," Liberty Head Coach Debbie Prowse said. "They did fantastic and they're still a young crew, one of the youngest in the field. They are really clicking as a boat and steadily improving, so it's great to see. They're putting in the time and the effort to do well so it's fun to watch."

She said the current was strong from a rainstorm that preceded the race.

"We train on (Smith Mountain) Lake, so we don't practice with a current and the girls were trying to figure out how can they could use the current and row hard at the same time," Prowse said. "That first day, we had a headwind, but the strength of the current made for some really fast times."

That four-woman crew divided into two Open Doubles tandems on Sunday with Moran and Drumheller placing ninth in 19:38.9 and Schaible and Bicknell 13th in 20:06.5, rowing against NCAA Division I competition. The Lady Flames' top pair only placed behind two boats from Alabama and Georgia Tech and four from Oklahoma.

"In the doubles racing, you don't have a coxswain so you are continually making steering adjustments and they did amazingly well," Prowse said. "The current seemed a little less, but then we had a tailwind pushing us as well, giving us fast times."

Complete results from the Women's Varsity 4 and Open Doubles races are available online.

Unfortunately, due to a two-hour fog delay on Saturday, Liberty's two Men's Doubles rowers did not get a chance to race on either day. The Flames' top boat of seniors Ryan Krupansky and Ben Weisman came in seeded third in the championship race based on their seventh-place finish last fall.

They will have another opportunity to row this Saturday when they compete in the fall season-ending Head of the South on the Savannah River in Augusta, Ga. The Flames' Krupansky and freshman Aleck Tilbrook and Lady Flames' Moran and Schaible will also combine to compete in a Mixed 4 after their Men's Doubles and Women's Varsity 4 races.