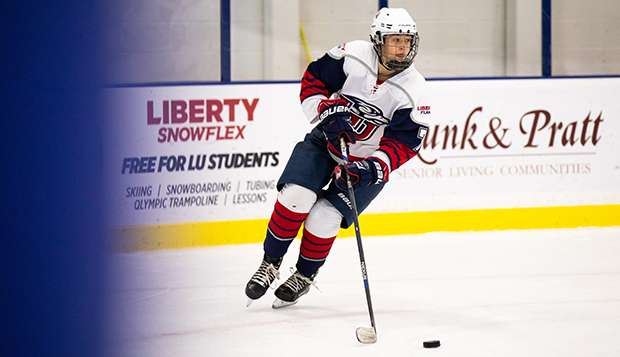 The Lady Flames opened with a 14-0 shutout of Rochester Institute of Technology on Saturday at the Pittsburgh Ice Arena in New Kensington, Pa., before withstanding a physical test in a 6-1 triumph over College Hockey East (CHE) foe Pittsburgh on Sunday at the Alpha Ice Complex.

"Morgan actually had her first college goal and her first college hat trick all in the same game," Liberty Head Coach Rena Leone said. "It was definitely a breakout game. She's been getting lots of playing time, but is still finding her groove on the ice with her new teammates."

Liberty outshot the Lady Tigers, 66-13, and sophomore goalie Madeleine Snook made 13 saves for her first shutout of the season.

In Sunday's showdown with the Lady Panthers, the Lady Flames scored once in the first period, twice in the second, and three times in the third, the last two by Hegele. Stengel tallied the first score off an assist from Turner, who sandwiched two goals around one by Sarah LaPorte, which she also assisted.

"Holly (Turner) played extremely well," Leone said. "She definitely led the team both as a captain and with her skill level on the ice. She kind of knows when she needs the team to get going and will do a couple offensive rushes to get more in the offensive mindset."

Liberty will travel to Erie, Pa., this weekend for three games in three days — against Mercyhurst, in a rematch of a 3-2 home win, on Friday at 3 p.m., SUNY Oswego on Saturday at 2 p.m., and Buffalo, in a rematch of a come-from-behind 3-2 CHE semifinal victory, on Sunday at noon.

Both Buffalo and Mercyhurst qualified for the ACHA DII National Championships last season while the Lady Flames (19-3-1) missed the cut as the seventh-ranked team in the East Region. Buffalo (7-1) is coming off a 1-0 home win over Mercyhurst on Saturday.