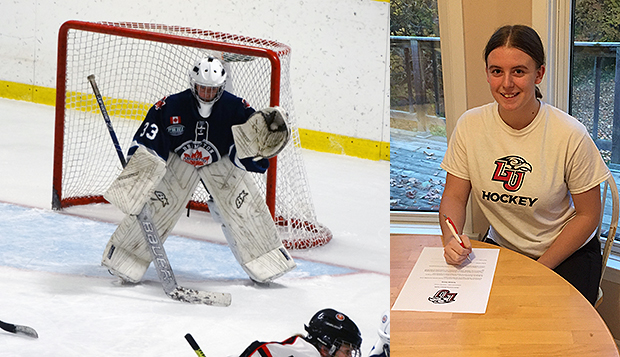 Amanda Storey, from Toronto, is a second-year goalie for the Brampton Canadettes of the Provincial Women's Hockey League (PWHL), posting a 3-4 record with a 2.16 goals-against average and two shutouts so far this season. She attended the Lady Flames' prospect camp in April with three other 2020 commitments — forward Carlie Foxhoven, defenseman Kamryn Barnes, and forward Abbey Mills.

"We are very excited to have Amanda joining our team," Lowes said. "She is a talented hockey player and a great young woman who will fit in great here at Liberty."

Lowes and his coaching staff have scouted and communicated with Storey for the past year and a half as she has played against high-level competition from the PWHL, the top girls hockey league in Ontario.

"We have watched as she has developed on the ice and taken her game to a new level," Lowes said. "Amanda has faced a lot of shots over the past couple of seasons against good competition and has shown she is durable and up to any challenge. She is a very reliable and consistent goalie who plays with poise and confidence."

Those are qualities that Storey, who plans to major in Exercise Science — Therapeutic Science at Liberty, believes she will bring to the Lady Flames.

"I am a calm and confident goaltender," she said. "My ability to challenge shooters and control my rebounds will help me at the next level. I lead by example and am able to control my emotions in high pressure situations."

She said she chose Liberty because of the countless opportunities she will have to grow as an athlete, student, and person, as well as to develop new friendships and reach her full potential as a hockey player.

"The state-of-the-art facilities, along with the impeccable culture the women's hockey program has built, made the decision a no-brainer for myself as well as my family," Storey said. "I could not be prouder to call myself a Liberty Flame for the next four years."

Nadia Rupoli, who broke the Lady Flames' program record with the 17th shutout of her four-year career in Sunday's 9-0 win over Midland (Neb.) University, is a senior and Liberty will need another goalie to compete with freshman Kayla Savoie-Penton for playing time between the pipes next season.

"Amanda provides stability for us at arguably the most important position on the ice," Lowes said. "I am confident she can come in and contribute right away, like we have seen with Savoie-Penton this season. Our future is bright in the net."