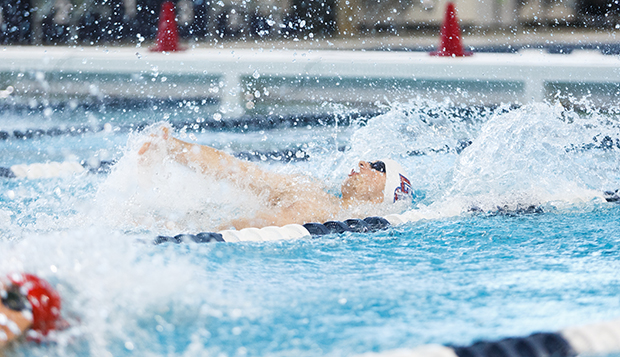 Flames freshman Matt Davidson competes in the backstroke at the Liberty Natatorium on Sept. 27. (Photos by Luke Bobbey)

"This was our third year in a row going and our first time winning it," Liberty Head Coach Heath Grishaw said. "We have always enjoyed going to this meet because it has really good competition and NC State always does a good job running it. It is a fun pool to swim in, knowing that so many great athletes have competed there. It's got a lot of history."

Individually, the Flames posted the most impressive showing in the 200 free, earning five of the top seven times, paced by Davidson, who finished nearly two seconds ahead of UNC's MJ Jaynes in 1:46.48. Fernandez placed third in 1:49.88, followed by junior teammate Robert Boehme (fourth in 1:49.98) and Klipp (fifth in 1:50.81).

The meet concludes the Flames' fall season schedule. They plan to compete in a couple more in the spring before sending all who qualify to the April 11-12 Collegiate Club Swimming (CCS) National Championships in Greensboro, N.C., hosted by UNC Chapel Hill.

"It will be a very tough field of competition, but, Lord willing, we would love to win," Grishaw said. "We're going to have a lot of people come and watch because it's close. We would love to have a national champion in an individual event, if not more, and maybe see a relay team win, too."

Last spring, the Flames' eighth-place 800 free relay performance accounted for half of their team points in a 29th-place finish at nationals. Liberty has yet to compete in that event this season, but will be ready when the time comes.