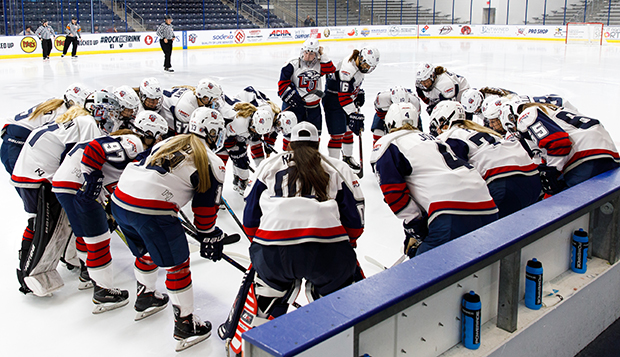 Rupoli, who had six shutouts her sophomore season, improved to 6-1 by recording her fifth of the season. She ranks second in the nation behind Midland's McKenna Gehrner, who posted shutouts in her first six games.

On Sunday, she made 13 saves while lowering her goals-against average to 1.03 and raising her save percentage to 95.8.

"Our defense did a really good job today picking pucks up," Lowes said. "We gave her a few chances there, but she held strong."

The Lady Flames scored two goals in the first period, three in the second, and four in the third to match the score from Friday's opener, strengthening their bid for a No. 1 ranking when the season's first ACHA DI coaches' poll is released this week.

"Games like this are sometimes tough to play in, but we just kept the energy up and just played our game," said Lady Flames junior forward Danica Polson, who scored two "dirty goals" in the third period after assisting goals in the first and second. "It's nice to score once in a while. Obviously, it's the teammates who are helping me do that."

With 11:50 remaining in regulation, Polson finished Morris' short feed from the right post, extending Liberty's lead to 7-0. Morris boosted the Flames' advantage to 8-0 with 7:37 to go, putting away the putback of a point-blank shot by junior forward Shelby Bradford in the left crease.

Polson capped the scoring at the 4:59 mark by collecting a loose puck left by Machholz out in front and lifting a quick wrist shot into the upper netting.

"We had a good weekend on the power play," Lowes said. "That was encouraging. It was a physical game, but we were really disciplined, only taking the one penalty to their five. We were getting good looks and we found a way to finish today, with three power-play goals from the same unit (Bradford, Morris, and Polson) that was getting good puck movement."

The Lady Flames (13-1, 4-1 WMCH) have outscored opponents 76-14 — 48-7 in seven home games including 25-1 in the sweep of Midland (8-5, 0-5 WMCH). Liberty pushed its winning streak to 12 games since splitting a season-opening series at WMCH rival Lindenwood Belleville, in a rematch of the ACHA DI National Championship game which it won for the third time in five years.

The Lady Flames will travel to Chicago next weekend for a three-game showcase hosted by Robert Morris University, with games against the Lindenwood Belleville on Friday at 8 p.m. (EST), Rhode Island on Saturday at 5:30 p.m. (EST), and the host Eagles on Sunday at noon (EST).

"We know how tough (the Lynx) are and we've got a bit of a rivalry brewing with them so I think we'll be excited for that," Lowes said.

"We just have to have a good week of practice and we'll be ready to go," Polson added. "It's going to be a big game, obviously tough, so we'll have to show up ready to play with high energy."