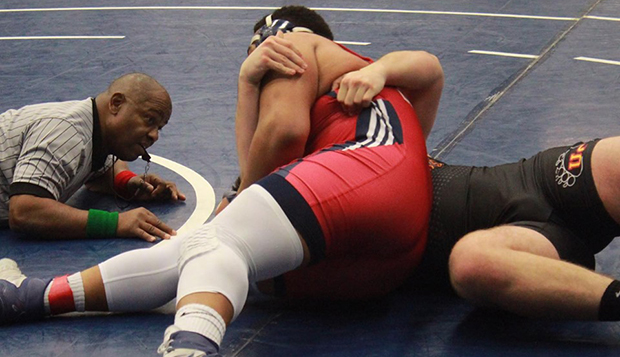 Freshman heavyweight Rick Weaver captured first place in his debut for the Flames, pinning three of his four opponents.

Liberty University's men's wrestling team made an impressive debut with a third-place finish out of eight complete teams at Saturday's Messiah Invitational in Grantham, Pa., despite competing without any wrestlers in the 133-, 141-, and 165-pound weight classes.

The Flames, who were the only NCWA club team in the tournament that featured predominantly NCAA Division III programs, finished third behind host Messiah (116.5 points) and Ursinus (81) with 70 points. They edged Elizabethtown (67.5), Johns Hopkins (63.5), McDaniel (47), Gettysburg (39), and Wheaton (33.5).

"The guys did a really good job with what we had as we placed third with only seven weight classes covered," Liberty Head Coach Jesse Castro said, "With a complete team, I think we would have had a shot of winning this tournament."

The Flames stacked their 197- and 285-pound weight classes with four wrestlers in each, more than a third of the entire 23-man roster they traveled with to Pennsylvania.

Freshman Rick Weaver was Liberty's only individual champion at heavyweight, going 4-0 and needing only 1 minute, three seconds to deck Johns Hopkins' Henri Behaeghel for his third pin of the tournament.

"That was amazing, quite impressive for Rick to do what he did," Castro said. "It wasn't expected, honestly. We knew he was going to be competitive."

However, Flames junior Jeffrey Allen, a returning national champion who finished 4-1 with his only loss to Behaeghel in the semifinals, was the top-seeded favorite.

"Jeffrey's pretty dominant in the room, and he wrestled well, too," Castro.

"The most impressive thing was in seeing, especially among the freshmen newcomers, the fight in them," Castro said. "That's hard to teach. We made some positional errors, losing position because of over-wrestling, but those are technical things we can build on."

The Flames will return to Pennsylvania next Saturday for the Fall Brawl hosted by Ursinus College, just outside of Philadelphia.