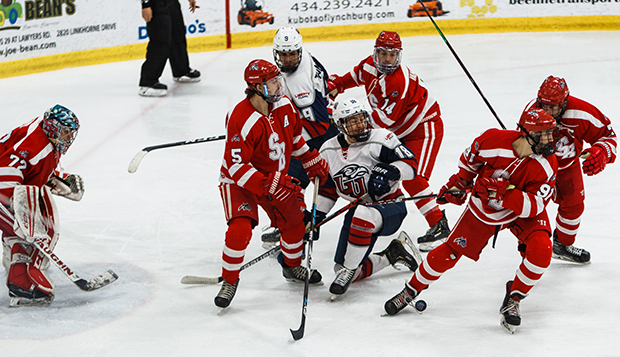 "It was definitely a really close game today, and those are the games that are fun, the ones you always dream about playing," Myers said.

"Those were two quality teams going at it and neither was willing to give an inch out on that ice tonight," Flames Head Coach Kirk Handy added. "It felt like we were earning everything we were trying to get out there. It was a battle."

Liberty (11-2, 6-0 ESCHL) ended a six-game drought on the power play and got a gutty performance from Myers and his stingy defense in front of him in a 2-1 triumph, completing a sweep of the Seawolves (7-3, 3-3).

"Every divisional game is important and to sweep a team like that that is arguably our biggest rivals is huge for us," Myers said. "It's a statement game, especially bouncing back from last weekend," when the Flames were swept at top-ranked Adrian.

Senior forward Victor Blomberg put Liberty on the scoreboard with 12:41 left in the first period by slicing across the crease and redirecting senior defenseman Chaydan Lauber's shot from the right point past Stony Brook goalie Robert Lockwood.

"Vic is a heart-and-soul guy and he battles every night, battles through injuries, battles to make our team the best it can be," Handy said. "He's a big part of our team."

With the Seawolves on a four-on-three power play midway through the second period, Myers preserved the Flames' 1-0 lead, sliding into a full splits position before sprawling to his right to deny forward Nick Belger point-blank opportunities in front.

Myers repelled a few more Stony Brook chances on the power play before senior defenseman Basil Reynolds came out of the penalty box for a breakaway shot, blocked by Lockwood.

"Last night, our penalty kill wasn't where we wanted it to be and tonight was probably the main reason why we were able to put ourselves in a position to win the game," Handy said. "Myers played fantastic for us as well."

"On the (penalty) kill, everyone was blocking shots and getting in front of lanes and it was a great team effort," Myers added.

Liberty capitalized on a power play early in the third period to seized a 2-0 lead when sophomore forward Josh Fricks recovered the rebound of a shot by senior forward Quinn Ryan set up by senior defenseman Jacob Fricks in traffic out front and pulled the puck into the right crease before slamming a low shot into the back of the net at the 19:26 mark.

"Our power play hadn't scored in six games and was 0-for-20 and comes up with the game-winning goal tonight," Handy said. "Credit to our guys for continuing to work hard and battle through the skid. Fricks is a goal-scorer and that's what goal-scorers do. He put himself in a position to finish."

Just over five minutes later, the Seawolves finally snuck a shot past Myers after an exchange of turnovers in the Flames' defensive zone. Forward Filip Pomianek flipped a turnaround backhanded shot from the right crease into the air and defenseman Brendan Pepe batted it into the back of the net from out in front, trimming the deficit to 2-1 with 14:29 remaining in regulation.

"I was seeing pucks really well through screens and most of the time, (the Flames' defensemen) were clearing the screens," Myers said. "The guys did a really good job of picking up bodies in front and not allowing them to get sticks on it, so they definitely made it a little easier on me there in the last 10 (minutes) to help us pull that one out."

Liberty will return to the LaHaye Ice Center next weekend to host Ohio, starting with the final Midnight Mayhem contest on Friday at 11:59 p.m. followed by a Military Appreciation game on Saturday at 7 p.m.