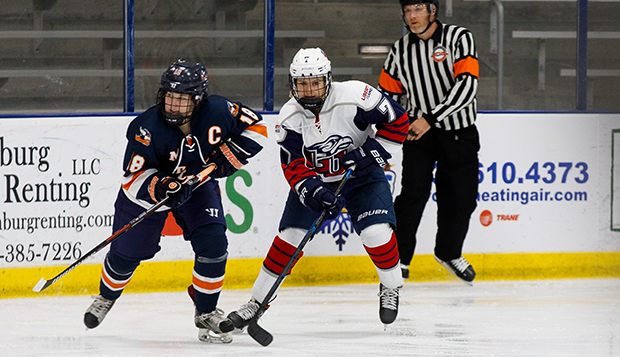 It was the second game of a three-game Women's Midwest Collegiate Hockey (WMCH) series, and a rematch of the Lady Flames' best-of-three quarterfinal sweep of the Warriors in last season's ACHA DI National Championships.

Senior defenseman Dana McLeod started the scoring with Liberty (12-1, 3-1 WMCH) on a power play by receiving a crossing pass from senior forward Vanessa DeMerchant and rocketing a shot from the high slot through traffic and past goalie McKenna Gehner with 7:32 left in the first period.

Midland (8-4, 0-4 WMCH) struck right back to tie the contest when defenseman Mackenzie Bertolos cut into the left crease and chipped Robin Hatcher's pass from behind the net into the upper netting with 6:50 to go.

As they did in Friday's opener, the Lady Flames broke the game open in the second period, this time scoring four unanswered goals to seize a 5-1 advantage.

With Liberty back on a power play, Bradford netted the go-ahead goal from point-bank range in the left crease off an entry pass from senior forward Alex Smibert between the legs of a Midland defenseman for a 2-1 lead at the 12:16 mark.

Just a minute and a half later, Bradford ducked as she deflected Birney's high shot from the high slot into the net, stretching the edge to 3-1 with 10:24 left.

"Part of our team's slogan is being relentless and when you get a goal and we get them on their heels, that's kind of a time to strike again and we've had a little success," Lady Flames Head Coach Chris Lowes said.

Gehner blocked Truter's shot on a two-on-one breakaway inside the 5:00 mark before she scored 10 seconds later, diving with her stick to shuffle a crossing pass from Pellizzari over Gehner into the top-right corner of the cage, stretching Liberty's lead to 4-1.

"I have really great teammates and they're giving me pucks in open areas and everyone's helping each other," Truter said. "If we bring good energy and the whole line's firing, then things just happen."

"(Tiana) Lisle got hurt today, but (fellow senior forward Rachel) Gibson stepped in and did a great job and Pellizzari really helped," she added. (Fellow freshman forward) Val (Manchak is) a very physical player. She's a hard worker and I really like playing with her."

DeMerchant capitalized on a third power-play goal in the final 13 seconds of the second period, finishing Pellizzari's crossing pass from behind the right endline that glanced off the stick of junior forward Danica Polson with a backhander into the top-left corner of the net.

"We started a little slow but second period, we kind of regrouped and figured out what we needed to do and we got it done," Bradford said. "We started in our D zone and worked our way forward to the neutral zone and the offensive zone and we got the result we wanted again, so it was good."

Senior forward Aly Morris deflected junior defenseman Sydney Pierce's shot from the point through the five hole as she sliced into the left crease with 8:47 remaining in regulation, extending Liberty's lead to 6-1. Truter capped the scoring less than a minute later, digging the puck out of a crowd in the corner and lifting a perfectly placed wrist shot from the left circle into the top left corner with 7:58 to go.

Truter, who with 11 goals and six assists is tied with Polson (6G, 11A) for second on the Lady Flames in scoring behind Manchak (6G, 14A), has enjoyed the transition to ACHA hockey and how her new teammates have made the adjustment to college life easy.

"This team is like a gift from God, honestly. He put me here," said Truter, who was born in South Africa and learned to play hockey in Newfoundland, Canada, where she lived for five years before moving to Victoria, British Columbia. "These girls are such a blessing. They are so kind and uplifting and praying after the game with both teams is just incredible. I really enjoy that."

Liberty outshot Midland, 54-10, nearly as decisive a margin as Friday's opener, when they held a 62-8 advantage. The Lady Flames will seek to maintain that edge in shots and goals in Sunday's 11:30 a.m. series finale, which again will be webcast live by LFSN.

"That's our goal, to hopefully finish with our best game of the weekend (on Sunday)," Lowes added. 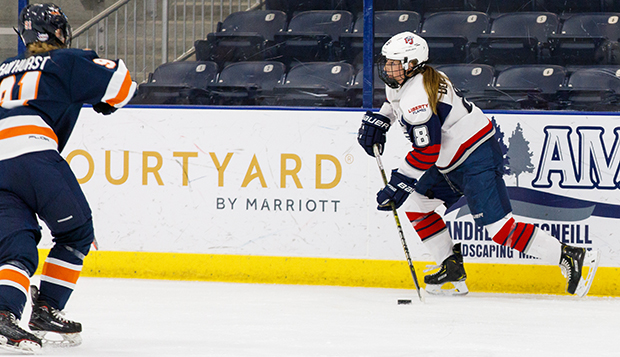