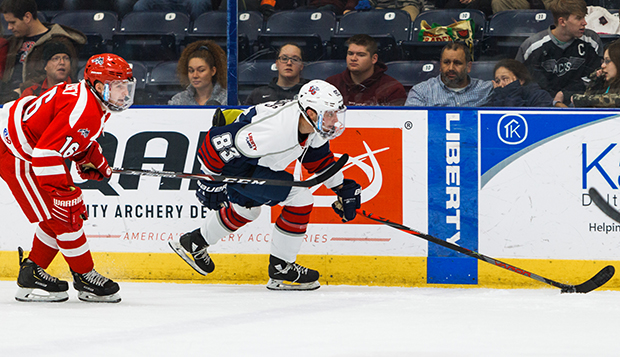 "It was a great game, I'd say one of the better games we've played this year," Flames Head Coach Kirk Handy said. "Stony Brook's a solid team. We continued to battle, and in the third period, we got some timely goals."

Freshman defenseman Dmytro Kobylyanskyi started the scoring midway through the first period with his first goal for the Flames, unassisted from the point through a screen by freshman forward Matt Bartel, lifting Liberty (10-2, 5-0 ESCHL) to a 1-0 lead.

Stony Brook (7-2, 3-2 ESCHL) forward Devin Pepe netted the equalizer in the final 16 seconds of a power play with 1:36 left in the first. He launched a shot from the high slot that looked to be going wide before deflecting off the stick of Flames freshman goalie Cédric Le Sieur into the back of the net.

The Flames struck back to score the go-ahead goal 5.5 seconds before the first intermission when Basil Reynolds received a pass from fellow senior defenseman Jacob Fricks and sent a shot on net that junior forward Cole Gammer deflected from deep in the right crease past Stony Brook goalie Richard Shipman.

Liberty appeared to pad its lead on the power play at the 12:57 mark of the second period when sophomore forward Arturas Laukaitis received a feed from Fricks in the right circle and ripped a wrist shot past Shipman into the back of the net. But after reviewing the video, the officials ruled a Flames player was in the crease during the play.

Seconds after the Flames killed a Stony Brook power play, senior forward Victor Blomberg sparked a counterattack by skating the puck up the right wing. He stretched the defense wide before sending a pass to sophomore forward Josh Fricks in the left circle, where he unleashed a wrist shot into the upper netting, extending Liberty's lead to 3-1 with 3:54 remaining in the second period.

The Seawolves started the third period on a five-on-three power play and capitalized a second before it expired when Dustin Rinaldo sent a cross-crease pass to fellow forward Chuckie Peck for a fast-break finish at the 18:48 mark.

Exactly two minutes later, Stony Brook forward Aiden Boehm, stationed in the right crease, knotted the game at 3-3 by tipping in defenseman Mike Kowicki's shot from the top of the right circle.

Moments after senior defenseman Chaydan Lauber hit the left post with a shot from the right point, Liberty reclaimed a 4-3 lead when Lauber sent a long outlet to senior forward Quinn Ryan, who had the puck checked loose as he skated into the slot, but right to Josh Fricks in the right crease for a top-shelf finish.

Then, with 8:30 remaining in regulation, Shipman blocked Jacob Fricks' shot from the right boards, but right to Flames senior forward Josh Hamilton for an open-net putback in the left crease, stretching the lead to 5-3.

Liberty broke the game wide open with two nearly identical goals in the final four and a half minutes, the first by Laukaitis from point-blank range in the left crease, who received a beautiful backhanded assist from Ryan as he was checked into the back boards. Then, with 3:07 to play, Ryan sent a forehand feed to Josh Fricks in the slot, where he capped his third hat trick of the season with a close-range shot into the upper netting.

"We showed some resilience," Flames Associate Head Coach Jeff Boettger said. "They played us hard and they also never quit, scoring those goals in the third period to tie it up. We played solid, defensively, and were moving the puck well. Offensively, we needed those goals. They made some mistakes and the guys were burying them."

The Flames outshot the Seawolves by a 42-23 margin with Le Sieur making 18 saves before picking up a 10-minute game misconduct penalty during a scuffle in front of the net. Sophomore goalie Tyler Myers, who will start Saturday's 7 p.m. rematch back at the LaHaye Ice Center, made two saves, the last on a one-on-one breakaway opportunity in the final minute.

Special teams was not a strong point for the Flames on Friday night, as they gave up two power-play goals in four shorthanded situations and went 0-for-3 with the man advantage.

"We'd like to score a few more on the power play and make sure that we're killing those (penalties) off," Handy said. "Overall, we want to continue to push the envelope. We aren't satisfied. We want to get better."

Saturday night's second game will again be webcast live by LFSN and carried on ESPN+. 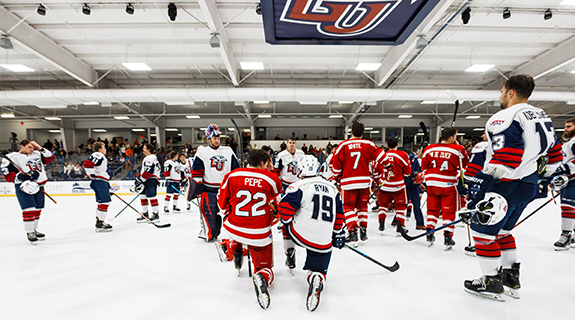