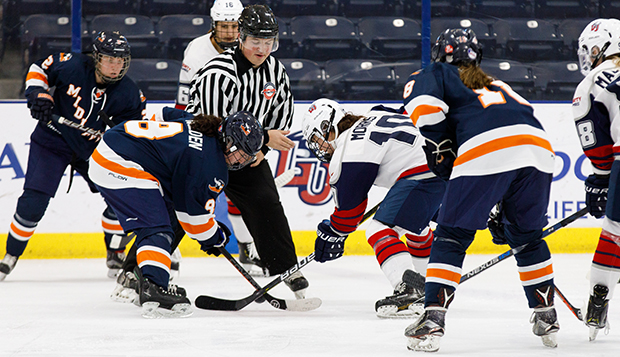 Liberty improved to 11-1 this season and 2-1 in Women's Midwest Hockey League (WMHL) play while Midland slipped to 8-3 and 0-3 in the WMHL after being swept on its home ice by Lindenwood Belleville, last season's national runner-up, last weekend.

"It was nice to see them again and see how both teams have developed over the past few months," Lady Flames senior defenseman Emily John said. "We really came together today. After we got the first one, we just started rolling. We just realized that we needed to bring up the intensity and we definitely did in the second."

On Friday, Liberty's high-powered offense, which has outscored opponents 60-13 this season, was held scoreless for the first 12 minutes before ending the scoreless tie at the 7:43 mark of the first period when Yannick Truter skated behind the cage and sent a pass to fellow freshman forward Val Manchak in the slot. She put a shot on net and senior forward Tiana Lisle one-timed the putback past McKenna Gehner from deep in the right crease for a 1-0 lead.

Just over a minute into the second period, senior forward Rachel Gibson received the puck off a faceoff won by freshman forward Brooklyn Pellizzari and skated along the end line before beating Gehner with a shot from deep in the left crease to make it 2-0 and open the floodgates for the Lady Flames. Just 21 seconds later, junior forward Danica Polson took a deflected pass from senior forward Aly Morris and fired a shot from the left circle inside the right post, stretching Liberty's edge to 3-0.

"We exploded there in the first minute and a half of the second to get two quick ones, that really changed the energy and the game," Lady Flames Head Coach Chris Lowes said. "They were playing a good road game, keeping it close, and that really took the wind out of their sails."

Sophomore forward Grace Machholz gave the Lady Flames a 4-0 advantage at the 15:40 mark by making a steal around the red line and starting a quick counterattack, which she finished with a top-shelf backhand from a sharp angle in the right circle.

A mere 18 seconds later, Truter put away a fast-break give-and-go assist from Manchak with a backhanded wrist shot to extend Liberty's lead to 5-0.

"We had a lot of good offensive chances, and a couple of really nice finishes on those odd-man rushes," Lowes said. "Those were heartbreaking for Midland, when they get the puck out of their zone and we would get a turnover and come right back."

Then, at the 12:25 mark, Polson won a faceoff in the right circle and crossed it to Machholz for a point-blank finish that put the Lady Flames up 6-0 before Polson scored off a power-play assist from Machak with 10:32 to go. Senior forward Vanessa DeMerchant capped the second-period scoring with a putback of a shot by senior defenseman Dana McLeod for a commanding 8-0 edge with 4:13 left.

Finally, with 7:34 remaining in the third, the Lady Flames punctuated the win as senior forward Alex Smibert converted off a fast-break assist from DeMerchant.

Liberty outshot the Warriors, 62-8, and freshman goalie Kayla Savoie-Penton made eight saves to record her second shutout, improving to 6-0 while lowering her goals-against average to 0.97 and raising her save percentage to 93.3.

"They're a young team and they've got some talent, (but) in games like this, our depth really shows," Lowes said. "It was good for us to get Game 1 and we looked pretty strong and confident. Our ability to roll four lines and six defensemen and be pretty dangerous on back-to-back-to-back shifts sets us apart."

The two teams will meet for Game 2 of the series on Saturday at 1:30 p.m. back at the LaHaye Ice Center, webcast live by the Liberty Flames Sports Network (LFSN).

"We're excited to go back and start 0-0 (on Saturday) and get it done," Lowes said. "It'll be a test of conditioning over the weekend, playing three against the same team."

During the first intermission of Friday night's ACHA DI men's hockey game against Stony Brook, Club Sports rolled out the red carpet for the Lady Flames, who received their ACHA DI National Championship rings from their 5-2 finals triumph over the Lynx. 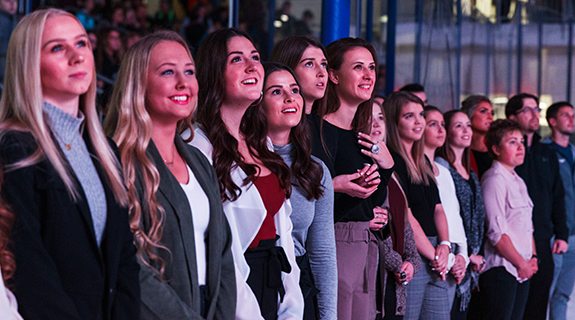