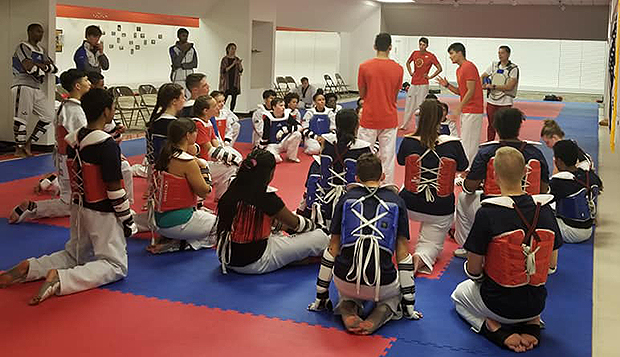 The Flames and Lady Flames practice in their training room in the former Macy's building at River Ridge Mall.

Twenty-one members of Liberty University's men's and women's taekwondo teams will travel to Ithaca, N.Y., to compete in their first Eastern Collegiate Taekwondo Conference (ECTC) tournament of the season, Sunday at Cornell University.

Nearly 500 student-athletes are expected in black belt and color belt divisions for the second of five ECTC events on the schedule. The Flames and Lady Flames plan to travel to two more with hopes of another top-five team finish in their division, as they experienced last spring.

"We took first place in our division at Cornell last year, and going into last event, we were still in third place, but we couldn't make it and ended up fifth," Liberty Head Coach Tom Childress said. "We missed the first ECTC event at MIT, which was held over Homecoming Weekend, but are going to try to add an event we have never done at the end of the year, hosted by the University of Vermont."

The Flames and Lady Flames will travel to Princeton in March for its second ECTC tournament. Next weekend, they will visit UNC Chapel Hill for the Atlantic Collegiate Alliance of Taekwondo (ACAT) opener before potentially hosting a second ACAT event in the spring before the ACAT Cup.

After taking 12 team members to Austin, Texas for the National Collegiate Taekwondo Association (NCTA) Championships last spring, Childress hopes to send that many to next April's nationals in California.

Of the 23 team members, nearly half are black belts and approximately two-thirds are female.

"Around half are in their first year on the team and we have a good group of new people with some experience," Childress said. "We have more black belts this year than we ever have, including a couple new athletes who joined the team who have already participated in Olympic-style scoring.

One newcomer he is excited to see compete is freshman black belt Phillip Muddleman.

"He is really smart, and a good fighter, and we are looking for him to do really well," Childress said.

For others, this weekend will be their first collegiate competition.

"We know we've worked hard and done our homework, though the results aren't always indicative of the work put in," Childress said. "The sport's dealing with a degree of human error and it's not always the one that won that actually wins."

All of the ECTC and ACAT events — in both forms and sparring — will be team competitions with the best of three winners in each belt and weight class advancing.

"Being a small team, that is a disadvantage for us," Chidress said. "For example, we only have one heavyweight male black belt (senior Wesley Angerville) so even if he wins, he loses. That's the disadvantage of the collegiate format."

On Monday night, Liberty held a self-defense seminar at Temple Baptist Church in nearby Madison Heights, Va., with the majority of the team serving as instructors for approximately 50 female members of the church. The Flames and Lady Flames have held similar events on campus at the start of each semester for the past six years.