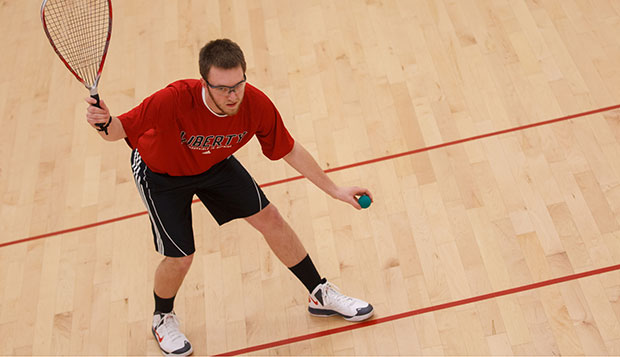 Liberty University's men's and women's racquetball teams competed in the Mid-Atlantic Collegiate Racquetball Conference tournament, Friday and Saturday at The Sports Racket in Lynchburg. It was the Flames' only competition of the second semester after playing in three MACRC events in the fall.

"We were in second place overall behind N.C. State going into today, hoping to hold onto that position (ahead of third-place UNC)," said Liberty junior Joel Denney, who lost to the Tar Heels' Devon Suskauer 15-11, 15-6 in the men's collegiate Division 2 Gold third-place match after teaming with Ryan Evans to finish third in Division 2 doubles.

Denney has replaced Furman as the Flames' top men's player, and sharpened his skills by working with him and Rodriguez and challenging his teammates.

"We do round-robins in practice and continue playing and practicing against everybody on the team," he said. "It's a good environment at practice. I'm the top player on the team, but we trade games every day in practice. There's good competition within the team as well as in tournaments. You get to play all different levels of people, so you can work on different aspects of your game and improve your game each day."

But there's nothing like tournament match play to push a player to a higher level.

"There's good competition this tournament," Denney said. "It's really shown me where to improve and where I'm doing well, so that I can take notes after this tournament and kind of focus on things I can get better at when I'm at practice."

In doubles play, Davis and Judkins placed second in the Division 3-4 bracket, falling to the Wolfpack's duo of Nathaniel Schwartz and Zadok Moss, 15-5, 5-15, 11-5 in the final, with Bass and Grimm finishing fourth.

After not even having a single women's player on the team in its first season last year, Rodriguez has witnessed a dramatic improvement in the Lady Flames' performances since last fall.

"The women for Liberty are awesome this year," he said, noting just having a women's team has helped the program, which is scored in men's, women's, and combined points for tournaments. "They've improved a lot. Everybody's surprised at how well they've done. They've been winning."

All five females were newcomers to the sport.

"We started with one the first match, then we had three the second match and now we have five, so this is a big deal thing for them," Rodriguez said.

Liberty senior Thea Beaty placed third in the women's singles Division 1-2 Gold bracket, winning a tight first game over N.C. State's Nikki Helms 16-14 before being dominated in the second game, 15-2, and turning the tables on Helms in the third, winning 11-1.

"A lot of it is a mind game, it's a confidence thing," said Beaty, who attacked Helms' backhand in the third game, following Rodriguez's advice. "What coach said helped. You've got to find their weak spots. She's a good player, though. I really enjoyed her sportsmanship."

Beaty only picked up the sport of racquetball last spring and has competed mostly in Division 2 for tournaments.

"This is the first time I've lost a game," she said. "I've never played a DI (match) before. They were good. They were stiff competition."

She has learned a lot and enjoyed herself at the same time.

"Coach is really good at just kind of meeting you where you're at and developing your skills," Beaty said. "I came in kind of really stinking and he helped me a lot with my shots and technique. It's just a for-fun thing for me. I'm a senior this year and this is my last tournament. I really enjoy it."