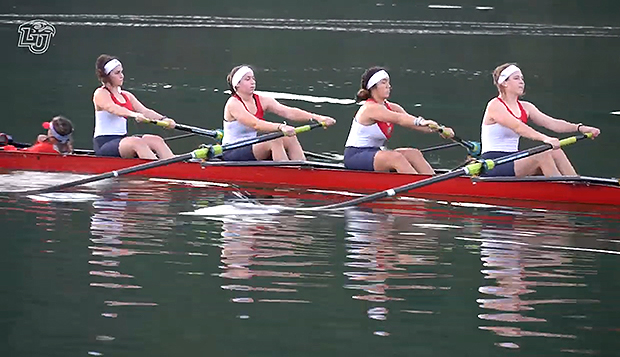 Liberty University's women's Varsity 4 crew claimed a gold medal in this past Saturday's Richmond Chase regatta, held out of Rocketts Landing on the James River.

Rowing with the same lineup it competed with at the season-opening Head of the Charles in Boston the previous weekend — sophomores Morgan Schaible and Lindsey Bicknell, junior stroke Joanna Moran, senior Victoria Drumheller, and freshman coxswain Morgan Epling — the Lady Flames finished first in the 5,000-meter race in 20 minutes, 27 seconds.

At the Head of the Charles, Liberty came in 22nd place out of 36 entries, a respectable showing against a much stronger field that included several NCAA Division I programs.

"That was a fantastic opportunity and great racing," Prowse said. "Last year, being a novice boat, and now rowing varsity, we weren't sure how we would do coming in, but the girls really held their own against those teams and did very well. Rowing on that river is very exciting. Having people cheering at every bridge and turn makes for a fun experience."

At Richmond, Liberty also entered two men's doubles tandems in an A boat manned by seniors Ryan Krupansky and Brad Weisman and a B boat rowed by sophomore Hayden Handel and freshman Aleck Tilbrook. The Flames finished fourth and fifth, respectively with less than 10 seconds separating the top four boats over the 5K course.

"Hayden just started skulling a month and a half ago and it was tricky for them working together," Prowse said. "They rowed some extra meters because they were snaking down the course."

This weekend, the same boats will compete in the Head of the Hooch in Chattanooga, Tenn., with the women's Varsity 4 also splitting into two doubles. They will conclude the fall season by traveling to Augusta, Ga., to race in the Head of the South on Nov. 9.

Prowse is actively recruiting new team members for the spring semester and the team will host an open house the week before Thanksgiving break, with prospective rowers invited to watch practices at the team's indoor training facility at River Ridge Mall on Monday through Friday, Nov. 18-22, from 5:30-7:30 a.m. Contact her at dprowse91@gmail.com for more information and to set up transportation.