Men's wrestlers ready to return to mat at Messiah Invitational 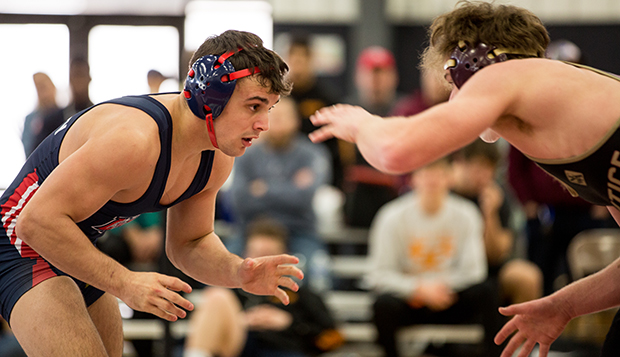 "We're definitely preparing ourselves and developing, physically and mentally, to be ready for that first event," Head Coach Jesse Castro said. "No doubt, iron sharpens iron, and that is happening from 149 pounds all the way up. We are right where we want to be."

Castro is eager to watch how all of the returning wrestlers and newcomers fare this weekend.

"That's what these tournaments are about, seeing these guys in competitive situations and seeing how they perform under pressure," he said. "We are taking the whole team, all the guys that can go, but we have had some injuries, so there's a question of who's going to be healthy enough to compete."

As has been the case in recent seasons, this year's lineup is thin at the lower weight classes but stacked in the middle- to upperweights. The Flames return four of their five individual national champions — senior Andrew Burdette (165), senior Sam Karel (184), graduate Austin Amos (197 pounds), and junior Jeffrey Allen (235). Allen will contend for the starting heavyweight spot vacated by Dominick Johnson, the lone champion lost to graduation, with graduate David Smith the likely starter at 235.

"We've got some good returners and some really good freshmen, too," said Castro, who returns sophomore 197-pounder Josiah Murphy and added two transfers at that weight class — Blake Barrick from NCAA Division I American University and Sean Gillespie from New York. "I'm excited to see them compete. They will be contenders with Austin (Amos), who is showing really good leadership, and the other wrestlers are following suit. I've been really impressed."

Freshman heavyweight Rick Weaver, who chose Liberty over ACC and NCAA Division I powers Virginia Tech and Virginia, is one of the most promising recruits, along with 184-pounder Ethan Martin, a four-time state champion at Rural Retreat High School.

Martin and junior Alex Hicks, who is back to full strength after redshirting last year due to shoulder surgery, will provide key depth at 184 with Karel currently sidelined by a sprained ankle.

The Flames' top lightweight recruit, 133-pound freshman Wes Solomon, will not be available this semester due to his commitments to Liberty's Army ROTC program.

"That hurts," Castro said. "We're still scrambling about what to do down there. We hope to have (Solomon) compete in the spring, but he is pretty adamant about not being able to do both."

At 125, the Flames feature freshman Tristan Walls and they return sophomore Charlie Hudson, an All-American last season, at 141. Junior Chad Cantrell, who overcame a shoulder injury to place third in the nation at 149 pounds last year, is now nursing a neck injury and will not likely compete until the Nov. 16 Southeast Duals and Nov. 17 Star City Classic hosted by Ferrum College at the Salem Civic Center.

The Flames return senior Joe Scott, who wrestled at Liberty as a sophomore before transferring to Washington & Lee last season. He will compete at either 165 or 174, where senior Cody Richmond has one more season of eligibility. Senior 174-pounder Luke Ely, who placed fourth at nationals, is not currently enrolled but is planning to finish his degree in the spring semester.

Liberty will host this season's NCWA National Duals, Jan. 24-25 at the LaHaye Ice Center — where the Flames are the only four-time champions (2012, 2015, 2018, 2019) — and the Feb. 29 Mid-Atlantic Conference (MAC) tournament. Liberty will attempt to win that event for a ninth consecutive year while qualifying (with top-five finishes) as many wrestlers as possible to strengthen its chances of three-peating at the March 12-14 NCWA Grand Nationals in Allen, Texas. The Flames will be seeking their fourth championship there after winning previously in 2015, 2018 and 2019.