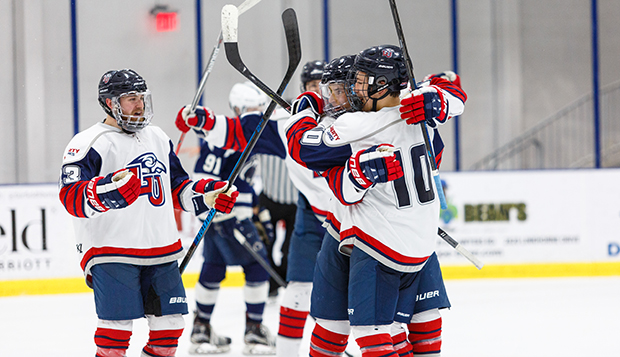 On its first road trip of the season, Liberty University's ACHA Division II men's hockey team witnessed an NHL game between the St. Louis Blues and the Los Angeles Kings, last Thursday night at the Enterprise Center in downtown St. Louis. The experience helped inspire the Flames to go 2-0-1 against ACHA DII teams from three different regions Friday through Sunday at the Lindenwood University Showcase.

"It was a fun night for the guys to relax and a cool bonding time for all of us," Liberty third-year Head Coach Ben Hughes said of attending the NHL game, won by the host Blues 5-2. "It was great motivation and a good eye-opener to see what some of the best players and teams in the world are doing."

The Flames (13-0-1) edged Central Region host Lindenwood, 3-1, in Friday's opener and Cincinnati, 4-3, on Saturday before giving up 2-0 and 4-2 leads versus UMass Amherst to end regulation in a 4-4 tie in Sunday's finale. The Flames won the ensuing shootout, 1-0, on a goal by sophomore forward Justin Barstead.

"It was an awesome trip and a great experience playing top-ranked teams from three different regions of the country and to have success," Hughes said. "We still have a lot to learn, but we gained a lot of valuable experience and it was great to see the guys step up and answer the call."

Against the host Lions, Michael Niederer scored first off an assist from fellow junior forward Blake Flanders with 12:05 left in the first period before Barstead pushed Liberty's lead to 2-0 with 7:12 remaining in the second, finishing a feed from sophomore defenseman J.D. George. Lindenwood cut the deficit to 2-1 just 21 seconds later before Flames sophomore goalie Timothy Doe iced the win with an empty-net goal in the final 23 seconds of the third.

"(Lindenwood's) a great team," Hughes said. "They outshot us (39-26) and had us hemmed into our zone a lot. It came down to us limiting our mistakes. We didn't give them many odd-man rushes or have many defensive breakdowns. Lindenwood didn't either, but we were able to capitalize on the few that we had."

Sophomore goalie Adam Partridge made 38 saves in the win.

"Adam played really well in net and made some big saves," Hughes said.

In Saturday's showdown with Southeast Region rival Cincinnati, the Flames led 2-0 on first-period goals by sophomore forwards Johnny Kettelle and Barstead before allowing the Bearcats to tie the game at 2-2 on back-to-back goals by Ryan Murphy. Third-period goals by Flanders and graduate defenseman Drew Crilly put Liberty back on top, 4-2, before Cincinnati scored the final goal with 3:57 remaining in regulation.

Graduate forward Jerrell Campbell scored off an assist from sophomore forward Charlie Wilkie with 12:28 left in the first period of Sunday's contest against Northeast Region foe UMass Amherst before Adam Norwinski doubled Liberty's lead to 2-0 at the 6:32 mark, finishing a feed from freshman forward Luke McFarlane.

UMass answered with power-play goals in the final three minutes of the first and second periods before Doe put the Flames back on top with a man advantage with 16:32 to go in the third off assists from McFarlane and Norwinski. McFarlane extended the lead to 4-2 off an assist from sophomore forward Peyton Nash before the Minutemen tied it up with two goals in the final eight minutes.

Liberty sophomore goalie Dakota Cyhaniuk made 43 saves, stopping all six he faced in a scoreless five-minute overtime period and seven in the shootout.

The Flames are off this weekend before hosting Sault College from Ontario, Canada, next Friday at 7 p.m. and Saturday at 1:30 p.m. at the LaHaye Ice Center. Those will be the last two games factored into the first ACHA DII regional rankings set to be announced the week of Nov. 10. 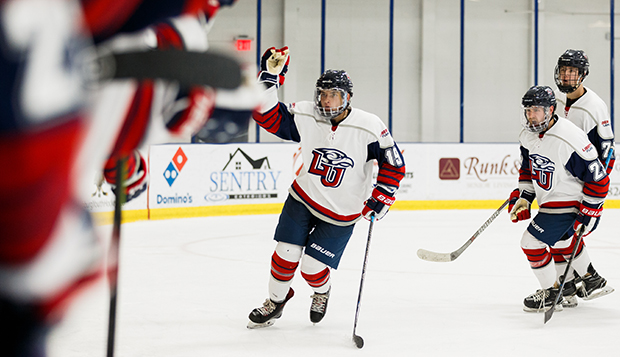 Flames freshman forward Luke McFarlane (19) skates along the Liberty bench after a goal.