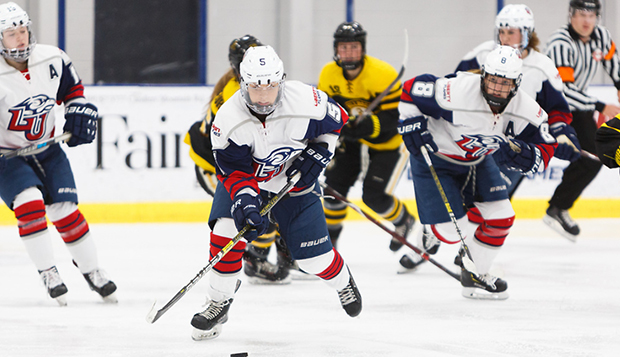 The Lady Flames (10-1), who completed a sweep of the Bulldogs in a rematch of the 2018 ACHA DI final, have won nine in a row since a season-opening split at Lindenwood-Belleville, the team they defeated in last year's championship game. Adrian, meanwhile, fell to 0-2 after getting a late start to its season.

"They are a physical team," Liberty senior forward Alex Smibert said. "They definitely challenge us in the corners and in our own end, physically, but it was a good for us today to battle back and hold them off. Normally, we struggle with finding the energy the second day, but we had really good energy coming into today. When we see them later on this season (Feb. 8-9), it'll be a different game."

With 14:20 left in the first period, the Lady Flames started the scoring by capitalizing on a spectacular two-on-one fast break. Sophomore forward Grace Machholz skated the puck up the left wing and through the circle before pivoting and sending a beautiful backhanded assist to trailing junior forward Danica Polson in the right crease for an open-net finish.

"Our line has good chemistry together," Machholz said. "We're aggressive, we're dangerous. It's fun. We played great overall as a team and the lines are producing really well."

Senior forward Tiana Lisle set up Liberty's second goal by winning the puck in the left corner along the back boards. She sent a quick pass to freshman forward Yannick Truter for a one-timed finish from the deep in the left crease past Adrian goalie Dana Colombo inside the right post, pushing the lead to 2-0 at the 8:12 mark.

Truter showcased her speed on another score assisted by Lisle less than four minutes later, skating the puck down the middle of the ice and accelerating past the Bulldogs' defensemen before tucking a backhanded shot through the five hole, extending the Lady Flames' lead to 3-0 with 4:28 left in the first.

Less than a minute into the second, Liberty converted on another quick exchange when Smibert stole the puck by blocking an outlet pass near the blue line and skated wide before sending a crossing pass through the right circle to fellow senior forward Vanessa DeMerchant for an easy backdoor putaway in the left crease.

"We forechecked hard and turned it over and it was a good odd-man rush," Smibert said.

"(The Bulldogs) were aggressive and getting away with a lot of (penalties), but it's good for us," Machholz added. "We need it. We're kind of soft."

With 7:45 left in the second period, the line of Machholz, Morris, and Polson connected again, this time on the power play. Polson stole the puck in the Bulldogs' left circle and set up Morris in the right crease, where her backhand glanced off the right post directly to Machholz, who tapped it into the open net from near the left post.

"The power play was good today," Machholz said. "We got a lot of chances and we finished."

The Lady Flames responded to extend their lead back to four goals by converting on a second power-play opportunity, with senior defenseman Deena Birney and Smibert setting up Polson for a one-timed shot in the left circle with 12:06 to go.

With Adrian on the power play with 7:54 remaining, Maddy Arnold sent a pass from the back boards to Williams in front who deked the puck around Rupoli before slamming it into the open left side of the net for the final score.

Liberty outshot Adrian 38-29 and Rupoli made 26 saves to improve to 5-1. The Lady Flames will welcome new Women's Midwest College Hockey (WMCH) opponent Midland for a three-game series next weekend at the LaHaye Ice Center, with games set for 2:30 p.m. Friday, 1:30 p.m. Saturday, and 11:30 a.m. Sunday.

"I'm excited to face them again," Smibert said. "We played them last year in the first round of nationals and they gave us two pretty good games. Then, the weekend after, we're going to the Robert Morris Showcase in Chicago to play Lindenwood, Robert Morris, (and Rhode Island). Games on the road, when you're playing four straight, really sets us up well for nationals."