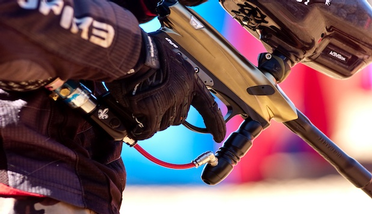 So, what makes up a "best" paintball school – accomplishments, sponsorships, cool- looking jerseys?

Key Factors
In my opinion, the most important aspect of a college paintball club is its home field. The ability to stay close to campus, to practice frequently without going broke, and to be able to meet tournament and recball players' needs, all lay the foundation for a successful paintball team.  A great home field allows a college paintball club to thrive in the National Collegiate Paintball Association (NCPA) and on campus.

Some other key factors examined were: club size, growth, accomplishments, sponsorships, support from the school and some cool university characteristics. After contacting as many NCPA club presidents as I could, Pando's Picks was born:

1. California State Long Beach 49ers: www.CSULBpaintball.org
Representing basically the entire West Coast, California State – Long Beach has worked diligently and made more than a name for itself in the NCPA. Starting with just eight members in 2007, the club has grown to more than 60 members in three years. With five paintball fields within two hours of campus (Hollywood Sports and the club's home field Tombstone in Colton to name a few) CSULB has the ability to practice with the best. "On any given weekend we can compete against some of the best paintball players in the world," says club president, Erikson J. Muto. The team's long list of sponsors, its clutch SO-CAL location, and its long list of accomplishments land Cal. State Long Beach as my pick for the #1 Paintball College in the USA!

2. Drexel University Dragons: www.DrexelPaintball.com
Drexel's paintball team has been WINNING college paintball tournaments since the NCPA was born. The current Class A X-ball National Champions (2010), as well as former champs back in 2000, boast one of the oldest and most successful paintball clubs in the country. The club also has the benefit of practicing at one of the best paintball fields on the east coast – Outdoor Adventures in Chesapeake City.

3. Ohio University Bobcats: www.OUpaintball.com
The Ohio University Bobcats have somehow managed to balance their school's party reputation with their dedication to college paintball over the club's long history with the NCPA. In 2009/10, OU had both the 2nd place Class A X-ball title, as well as the #2 party school rank in the USA (Princeton Review). The Bobcat's home field, Ohio Paintball™, was created by the students for the students, and its X-ball and woodsball fields have thrived due to the 40+ club members and the endless number of students driving up from campus every weekend.

4. Liberty University Flames: www.LUpaintball.com
Liberty lands the fourth spot strictly because of its $500,000 university-built paintball field located on-campus. "The administration supports the endeavors of all their teams, but has really embraced the efforts of the paintball team," explains Liberty's coach, Todd Hoglund. Liberty also hosted the first ever on-campus NCPA event, The Liberty Open, on Nov. 14th, 2009.

5. University of Tennessee Volunteers – www.UTpaintball.com
Tennessee has the luxury of practicing on-campus as often as they would like at their very own indoor facility. The team has consistently placed high in Class A X-ball mainly because of their ability to play a LOT… for free.