Flames outshoot Bulldogs, give up late goal in 1-0 setback 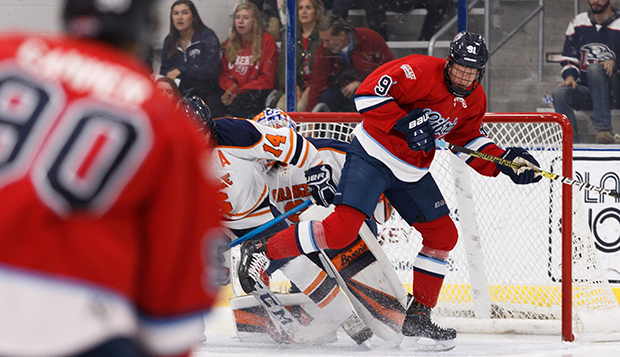 Sophomore forward Matt Bartel works around the cage at the LaHaye Ice Center, where the Flames return next weekend for an ESCHL series with Stony Brook. (Photo by Luke Bobbey)

A day after being outplayed in most phases of Friday night's opener, Liberty University's ACHA Division I men's hockey team gave top-ranked Adrian College a severe test before allowing a late goal in a 1-0 loss, Saturday afternoon at the Arrington Ice Arena.

"It was more of a chess match today, going back and forth," Flames Head Coach Kirk Handy said. "It was a really good game. We battled it out for 60 minutes. They were just able to slip one past us."

"Structurally, we played better," Handy said. "The guys responded well and I am proud of them. They played well and the good news is, though we lost twice, it's only October and we've got time to get better, to fine-tune what we're doing. We learned a lot this weekend about what we need to improve on and the level at which we need to play consistently."

Adrian netted the game's goal when forward Domenic Moore got behind the Flames' defense and redirected entry passes from Marcus Rose and Kyle Perkowski past freshman goalie Cédric Le Sieur with 1:38 remaining in regulation.

Liberty pulled Le Sieur for the rest of the contest, but was unable to generate any high quality shots to record the tying goal while the Bulldogs missed three empty-net chances down the stretch.

For the contest, the Flames outshot the Bulldogs, 29-26, and both teams had four penalties and two power-play opportunities.

"Cédric played really well in goal today," Handy said. "He made some big saves for us and gave us a chance to win. We pulled him at the end and did everything we could to try to tie it back up. Overall, I thought our guys were solid today. We stuck to our game plan and had opportunities to score.

"It was a tight game that could have gone either way," he added. "They scored on a scramble in front of our net, and we had a couple scrambles in front of theirs. That's the way games are going to go against these top teams."

The Flames return to the LaHaye Ice Center to host ESCHL power Stony Brook on Friday and Saturday at 7 p.m.