No. 1 Bulldogs land first blow in opener with No. 4 Flames 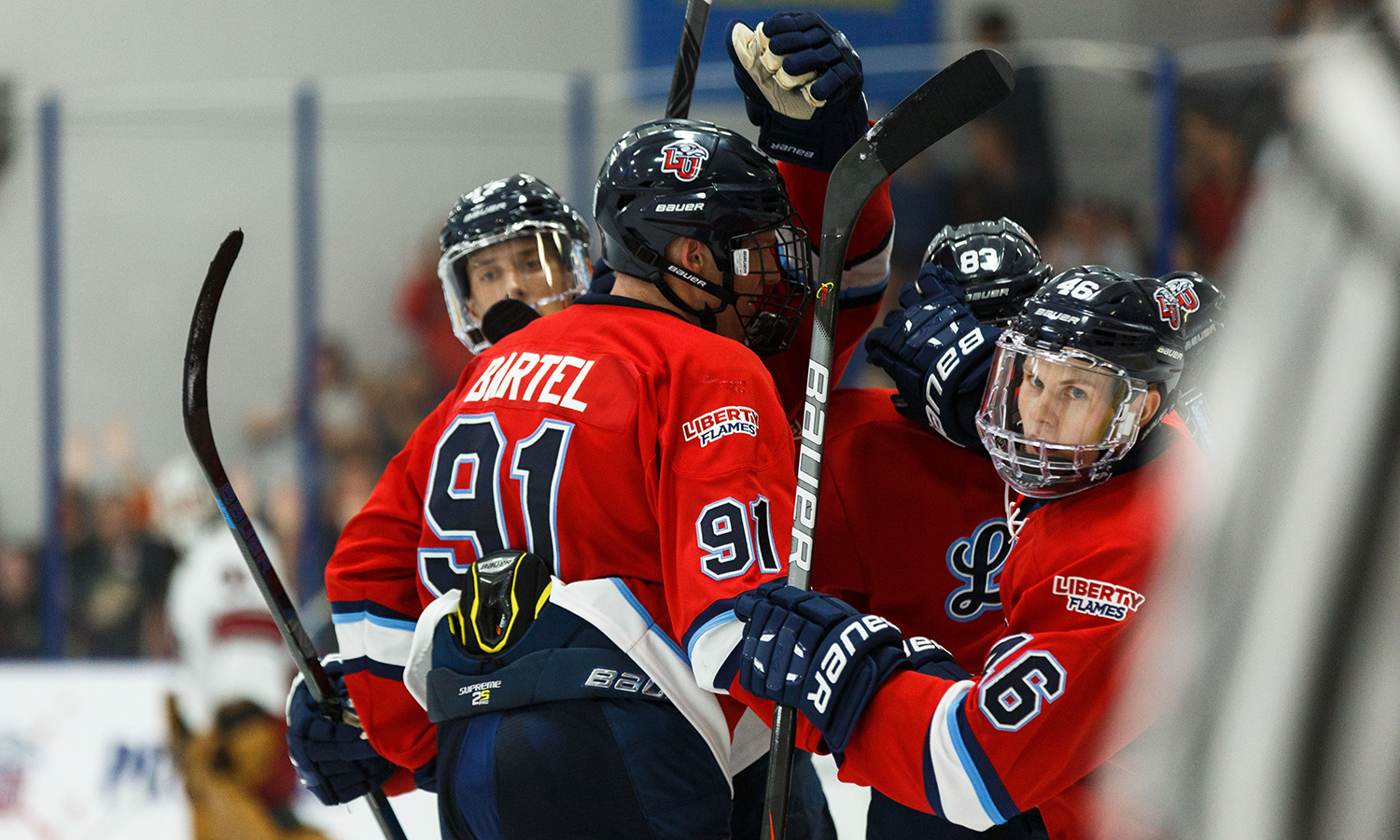 Sophomore forward Matt Bartel (91) celebrates a goal in a game at the LaHaye Ice Center. (Photo by Gabrielle Calhoun)

Adrian (9-0) ended the 9-1 Flames' longest winning streak to start a season in 10 years and won for the eighth time in as many meetings between the two teams since 2010.

"We had a slow start and didn't come out prepared to play the way we wanted to play," Liberty Head Coach Kirk Handy said. "We didn't look like the team we wanted to be."

The Bulldogs struck first just 3:01 after the opening faceoff when forward Domenic Moore received a crossing pass and lifted a one-timed shot past Flames sophomore goalie Tyler Myers into the upper netting.

Liberty netted the equalizer at the 8:03 mark on a fast-break counterattack sparked and finished by senior defenseman Chaydan Lauber. He sent an outlet pass to sophomore forward Arturas Laukaitis, who skated up the left wing and toward the net before leaving the puck out in front for Lauber to tuck under the pads of Adrian goalie Michael Barrett.

But the Bulldogs seized control with three goals in the final 6:10 of the opening period, the first by Emanuel Silverio, who caught a clearing attempt deep in the Flames' defensive zone and slipped the puck past Myers from point-blank range out in front.

The Bulldogs outshot Liberty, 39-32, and Myers made 25 saves in his first setback. He had only allowed four goals in his first five outings and his goals-against average rose from 0.80 to 1.83.

"We left Tyler out to dry, to be honest, which is just unacceptable," Handy said. "He worked hard in there, but he was all by himself on some of their goals."

After Myers made three great saves of high-percentage shots on an Adrian counterattack, Marcus Rose recovered a rebound and maneuvered around the crease before digging a backhanded shot into the back of the net with 2:40 left in the second. Finally, with 49 seconds left in the period, Bulldogs forward Brenden Stanko, skating through the right crease, deflected in defenseman Jordan Oshowy's shot from the top of the right circle for a 4-1 advantage.

"We just weren't where we needed to be to be in the game, down three goals at the end of the first period," Handy said.

Midway through the second, Adrian forward Tyler Fyfe capitalized on another Liberty turnover in its own zone with a quick wrist shot from in the slot to stretch the lead to 5-1.

Both of the Bulldogs' third-period goals came on the power play, the first as the Flames were trying to kill a five-minute major. In between, Liberty junior forward Cole Gammer and senior forward Brock Thompson scored back-to-back goals to trim the deficit to 6-3 with just under 8:00 remaining.

"I thought we played a lot better in the third period, but there is a lot more in that locker room than we showed tonight," Handy said. "That performance wasn't anywhere close to what we wanted it to be. We'll hit the reset button and come back (Saturday) ready to play."

Saturday's rematch is set for 1 p.m., and will be webcast live on Adrian's YouTube channel.