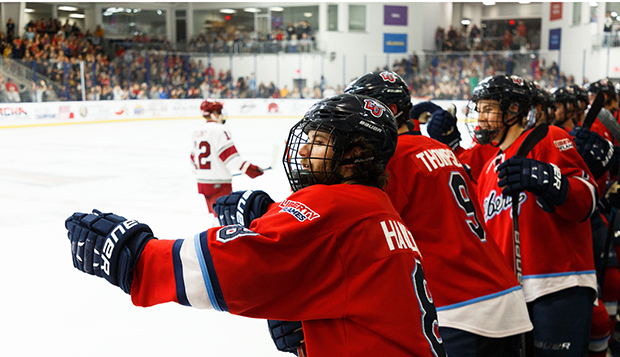 Senior forwards Josh Hamilton and Brock Thompson lean out over the Flames' bench in the Midnight Mayhem game. (Photos by Gabrielle Calhoun)

This weekend's showdown between Liberty University's ACHA Division I men's hockey team and 2018 national champion Adrian College pits the top-ranked Bulldogs against the fourth-ranked Flames, who are off to their hottest start in 10 years.

"It will be great college hockey this weekend," Liberty Head Coach Kirk Handy said after Wednesday's final home practice in the LaHaye Ice Center, before the team boarded a bus bound for Michigan on Thursday at 6:30 a.m. "We're looking forward to playing Adrian. You always want a chance to play games like this and it's a great opportunity for us in October. Our guys are working hard right now. We had a good practice today and we'll be ready to go. They'll be two great games up there."

"Anytime you are playing Adrian, it is going to be a big test, especially this weekend with them being No. 1," Liberty senior forward Brock Thompson said. "There's a lot going into this game. They're a good team. They're four lines deep, they play really hard. They're very consistent, they don't take dumb penalties."

The two teams met four times last season, with the Bulldogs sweeping both series, at home and away.

"Playing them in the past, it was kind of a mystery of who they were and if they really were that good and we went up there and they definitely proved that they were," Thompson said. "This year, it's going to be a lot about bringing our own type of swagger and confidence."

Though the Flames will be without junior forward and head captain Devin Pierce, they will be at near full strength with the return of sophomore forward Arturas Laukaitis.

"Our depth is definitely the best it's been in the four years I've played here," Thompson said. "We're a good team and we're just as deep if not deeper than they are. We can't come off thinking that we don't deserve to be there. We've put in all of the hard work and we need to be able to show that every shift. We know what to expect and now we have a game that we have established that we're confident and strong in. We play it well, we practice it well, and if we play our game, it doesn't matter where we play."

This will be the Flames' third 10-hour road trip in four weekends, and they have two more trips to New York on back-to-back weekends in November before playing five of seven series in the spring semester in the LaHaye Ice Center.

"These road trips have been long and they've been hard," Thompson said. "We've played some tough teams, but they've all been good preparation for this weekend, which is the real test. This is what we live for."

All-Time Series: Adrian has won all seven of the teams' meetings at the ACHA DI level, including by 8-2 and 6-3 scores last October in Michigan and by 5-4 and 4-0 counts in February in Lynchburg, Va., when they held the Flames scoreless at the LaHaye Ice Center for the first time in more than five years. Previously, the Bulldogs swept a series at Liberty in 2010 and eliminated the Flames from the 2012 ACHA DI National Championships in 2012.

Liberty Scouting Report: The Flames have started the season on their longest winning streak since 2009, when they went undefeated until Thanksgiving and rose as high as No. 3 in the ACHA Division I rankings. Handy isn't preparing his team any differently, but realizes they may have to elevate their level of play to upset the top-ranked Bulldogs.

"We'll have to keep progressing from where we left off last game," he said. "Our goal is to get better every time we're out there and that's what we're going to do this week. We're not going to change anything."

The Flames feature balanced scoring with 11 players who have scored three goals or more through nine games, paced by sophomore forward Josh Fricks (9 goals, 13 assists) and Thompson (7G, 4A). Senior forward Quinn Ryan is tied with Fricks for the team lead with 13 assists and has netted six goals while senior defenseman Garrett Nelson (4G, 12A) and junior forward Jordan Bochinski (6G, 8A) rank third and fourth in total points.

The Bulldogs have outscored opponents 62-8 through eight games this season, ranking first in the ACHA DI, albeit barely, over the Flames, who hold a 61-11 advantage through nine games.

Coaches: Handy is in his 20th season as Liberty's head coach and has compiled an overall record of 441-180-29. Adrian is led by 2018 ACHA Division I Coach of the Year Gary Astalos, who is now 106-7 in his fourth season at the helm.