Figure skaters to sharpen routines in competition on Sunday 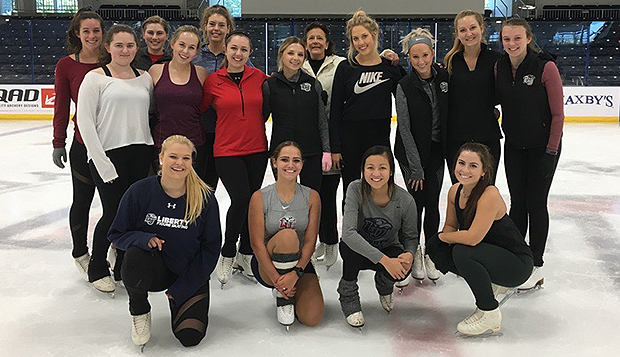 The 25 members of Liberty University's figure skating team will have a chance to showcase their routines during a mock competition this Sunday at 3:15 p.m. at the LaHaye Ice Center.

With both of their Southern Eastern Section meets scheduled for the spring semester, this will be the only opportunity for the Lady Flames to skate in a competitive atmosphere until after Christmas.

"We have about 25 skaters on the roster, including six new freshmen," Liberty Head Coach Dawn Harter said. "There are a lot of high beginners, but also quite a few filling up the junior and senior spots."

The Lady Flames, who will host the first sectional competition on Feb. 15-16 before traveling to a second on March 7-8 at Delaware, have a much better chance than in previous seasons of qualifying for the U.S. Figure Skating Intercollegiate National Championships, set for March 27-29 in Minneapolis.

Based on its total team scores in the two meets, Liberty must finish in the top four out of approximately 20 schools in the Southern Eastern Section — from Alabama, Delaware, Florida, Georgia, Maryland, North Carolina, Pennsylvania, South Carolina, Virginia, and Washington, D.C. — to qualify.

Harter anticipates Delaware, Penn State, and Carnegie Mellon (Pa.) will be three of its top competitors.

Aside from focusing on fine-tuning their routines for competition, the Lady Flames have found ways to grow spiritually and personally on and off the ice this fall.

"We have really good team chemistry," said freshman Sarah Hicks, the younger sister of 2017 graduate Rebekah Hicks. "Even though we're all different ages and different levels, we still help each other and encourage each other through everything and bond through being on the ice practicing together."

With no travel itinerary this semester, Harter has searched for alternative ways to spur team growth.

"When we go on the road for competitions, that travel time helps with team bonding," Harter said. "Since we don't have that this semester, we are trying to create events that might help with that process and ways to keep the team connected."

On Nov. 9, the skaters will step out of their comfort zones and engage in community outreach, mentoring members of the Holy Cross Regional School's girls' basketball team, coached by Harter's husband, Gerry. Over an evening cookout and bonfire, many will share testimonies of how they have leaned on the Lord to get them through difficult situations and moved on after overcoming challenges.

"We are looking forward to seeing how that develops," Harter said. "It is an opportunity for them to do something for someone else in a society that can be so ‘me-centered.' We want to be building relationships and encouraging one another."

She hopes the time spent together — between a college team socializing with a high school team in totally different sports — leads to discipleship that will benefit both.

"In order to operate more successfully, you have to trust one another, to tear down some walls in order to be vulnerable with one another," Harter said. "Speaking into their lives and sharing what they've learned and how to cope with challenges and issues they've faced in coming into college, ranging from injuries to family issues … Whatever God puts on that person's heart to share with them, it's Christ they need to overcome it. They don't have to do it alone."

She said the skaters have already had experience mentoring area youth on the ice through the "Learn to Skate" sessions geared toward homeschool students on Wednesdays at 10:30 a.m. and the general public on Sundays at 5:30 p.m. at the LaHaye Ice Center.