DII Flames improve to 10-1 with lopsided sweep of Dragons 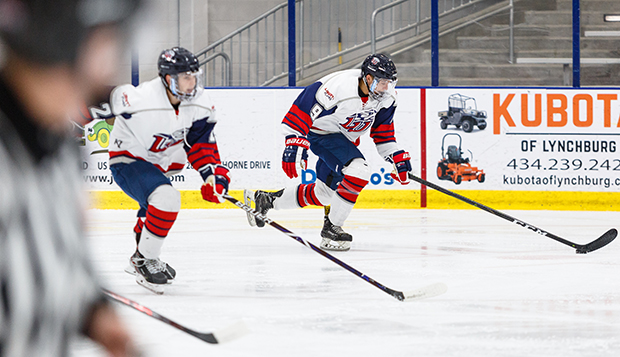 Drexel (1-4) started the scoring with 13:32 left in the first period when Mark Lewery took a pass from Matthew Crane in the left circle and fired a top-shelf slap shot past Flames goalie Dakota Cyhaniuk. Dragons captain Tim Mikalic then cut into the slot and finished a feed from behind the cage for a 2-0 lead at the 7:38 mark.

With 20 seconds to go in the first period, Flames sophomore defenseman Maxx Mitchell's shot from the top of the left circle was deflected behind Drexel goalie Logan Kramsky by junior forward Blake Flanders, allowing senior forward Michael Niederer to tap the loose puck into the open net and trim the deficit to 2-1.

Just over two minutes into the second period, Flames graduate forward Jerrell Campbell received freshman forward Alexander Schneider's wraparound pass from behind the left post and slammed it past Kramsky for the equalizer. Less than three minutes later, senior defenseman Ryley Richardson intercepted a Drexel clearing attempt in the high slot and fired a wrist shot into the lower right corner of the net for the go-ahead goal, lifting Liberty to a 3-2 edge that it would not relinquish.

Sophomore forward Darren Carter extended the Flames' lead to 4-2 at the 9:49 left in the second with a backhanded putback of Schneider's shot from the top of the left circle. Facing no defensive resistance, Flanders skated across the slot and fired a wrist shot inside the left post for a 5-2 advantage with 5:10 left in the second. Fifteen seconds later, Liberty capitalized on another uncontested opportunity with freshman forward Luke McFarlane setting up Niederer with a cross-crease assist for an easy tap-in at the right post.

With the Flames on a five-on-three power play early in the third period, Alex Norwinski threaded a wrist shot from the top of the right circle through traffic, stretching their lead to 7-2. Moments later, with Liberty still up one man, freshman defenseman Aaron Partridge took a pass from Mitchell in the left circle and fired the puck off the right post and in to make it 8-2 with 17:04 to play.

At the 10:05 mark, sophomore forward Charlie Wilkie won a faceoff that bounced off a Dragons' player's skate back to him in the right circle before skating through traffic and beating Kramsky inside the right post for a 9-2 edge. Less than a minute later, Norwinski skated up the left wing and unleashed a wicked wrist shot into the top-left corner of the cage. Finally, just over a minute later, Schneider capped the scoring at the 8:02 mark by taking a pass from Campbell and skating through the left circle before cutting back on the left endline and finishing with a sharp-angled shot into the top-right corner of the net.

In Saturday night's rematch, sophomore forward Justin Barstead started the scoring with a backhanded putaway of a one-on-one with Drexel goalie Grainger Rickenbaker with 11:16 left in the first period.

With 4:44 remaining, Carter cleaned up the rebound of Partridge's shot from the top of the left circle, finishing through the five-hole. Niederer came out of the penalty box to win the puck and start a fast-break, feeding Flanders for a point-blank finish and 3-0 advantage with 7:21 left in the second.

McFarlane put away a loose puck after a shot by Niederer that popped over the shoulder of Rickenbaker, putting the Flames up 4-0 less than a minute into the third.

The Dragons got a fluke goal with 16:25 to go when an entry feed by Jake Rudloff deflected off the stick of a Flames defenseman, trimming Drexel's deficit to 4-1, spoiling the shutout of sophomore goalie Adam Partridge. But Flanders answered exactly a minute later with a wrist shot from deep in the left circle over the glove of Rickenbaker and, with the teams skating four-on-four, sophomore forward Timothy Doe set up Mitchell's final score at the 3:29 mark.

The Flames will take to the road for the first time this season this weekend when they travel to compete in the Lindenwood University Showcase, where they will face the host Lions on Friday at 7:30 p.m., Cincinnati on Saturday at 7:30 p.m. and UMass Amherst on Sunday at 11:15 a.m.