Flames put the squeeze on Orange; 9-0 start best in 10 years 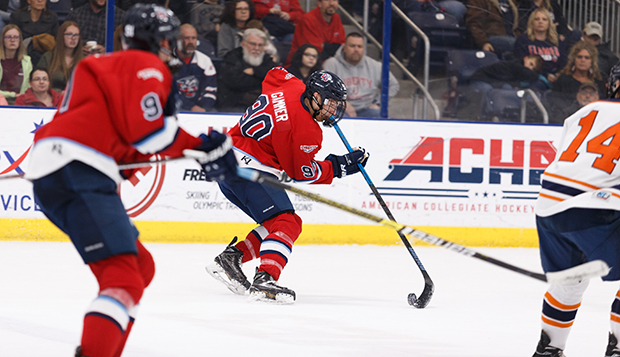 It wasn't always pretty, and it got a little bit chippy, but Liberty University's ACHA Division I men's hockey team executed efficiently enough to complete a Homecoming Weekend sweep of ESCHL rival Syracuse with a 4-1 victory on Saturday afternoon at the LaHaye Ice Center.

"It's always fun to play these types of games, a little tighter, a little tougher," Flames senior forward Victor Blomberg said. "This is how you have to play to be a championship team. You have to put your work boots on and get out there. We like to battle, so it was a good test."

Fifth-ranked Liberty improved to 9-0 overall — its longest winning streak to start the season since 2009 — and rose to 4-0 in ESCHL play. Meanwhile, the 21st-ranked Orange slipped to 1-4-1 and fell to 0-4 in ESCHL action.

Handy was pleased with the level of intensity his team showed on both ends of the ice, but especially in the defensive zone, even after senior defenseman Garrett Nelson was knocked out of the contest.

"I was pretty proud of our guys' effort overall and liked the way our PK responded today," he said. "We were 100 percent (six-for-six) on the penalty kill, which was good. We made some adjustments and had some guys go out and some guys come in and play well for us. That's important. Colin Baird had a really solid game for us, and Chaydan Lauber played really well."

Senior forward Brock Thompson, one of a few Flames left hobbling after the game, started the scoring with 15:21 left in the first period. He received a cross-ice, fast-break assist from senior defenseman Chaydan Lauber and sliced through the right circle at a sharp angle before flicking a backhand past Syracuse goalie Eric Parker.

The Orange netted the equalizer at the 9:57 mark when Lucas Prestamo took a short pass from Zack Gordon and lifted a wrist shot in the left circle that Liberty freshman goalie Cédric Le Sieur let flip over his glove and slide across the goal line.

Moments after a Liberty penalty kill, sophomore forward Matt Bartel picked up the puck from sophomore defenseman Dmytro Kobylyanskyi and cut back through the right circle before unleashing a shot inside the right post for a 2-1 advantage with 4:46 left in the first.

The Fricks brothers — senior defenseman Jacob and sophomore forward Josh — teamed up to assist Liberty's third goal, clearing the puck out of the defensive zone and up along the right boards, respectively, to senior forward Quinn Ryan. He skated past Orange forward John Coggiola and defenseman Kai Miller and slipped a point-blank shot under the pads of Parker, who couldn't stop it from trickling across the goal line.

With 16:43 to go in the third, sophomore forward Devin Melice gathered a rebound of Jacob Fricks' shot from the point in the right corner and sent an entry pass into senior forward Andy Clarke in the right clot, where he one-timed his deflection inside the right post.

"Up and down the lineup, we got good contributions," Handy said. "Andy Clarke and Melice weren't playing a whole lot, but when they did, they were very effective for us."

The Flames return to the road for their third 10-hour bus trip in the past month next weekend, when they will travel to Michigan to challenge top-ranked Adrian College, the 2018 ACHA DI national champion.

"Adrian's ranked No. 1 now so you don't get a better test than that, playing them on the road," Blomberg said. "We have to play our game and stay disciplined and we'll have a good chance of beating them. We absolutely have the team to do it. I believe in all of these guys. We're ready to battle, to go for it."

"It's a huge (series at Adrian) and we're looking forward to it," Handy added. "We're focused on what's next and how we can get better as a team. Absolutely, that's our goal, just to worry about each game and keep going from here."