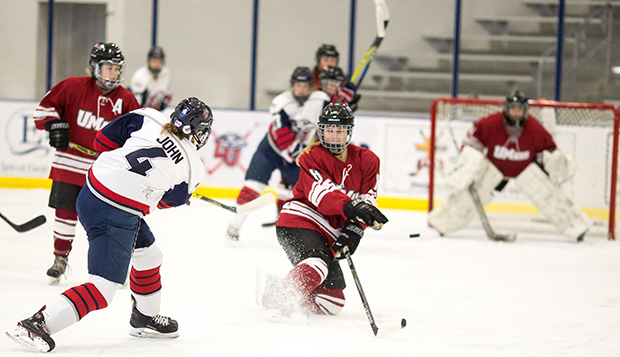 Matching the intensity of host Massachusetts down the stretch, Liberty University's ACHA Division I women's hockey team used two goals by senior forward Aly Morris to double up the Minutewomen, 4-2, Friday night at the Mullins Center in Amherst, Mass.

"Aly's always consistent for us as a two-way centerman and it was nice to see her contribute for us offensively when we needed it," Lady Flames Head Coach Chris Lowes said. "A great thing about our lineup is we've got so much depth, different people can step up on different nights, and tonight was a great example."

The Lady Flames (6-1) were tied with UMass 1-1 after the first period and 2-2 after the second before mustering enough late-night energy to pull away in the final 10 minutes, defeating the Minutewomen for the fourth time in seven days.

"We really had to battle it out," Lowes said. "We had some stretches of momentum and didn't capitalize a few times and they seemed to find opportunities and made the most of them. They played us tough four games in a row, but tonight it looked like they had a sense of urgency and they outworked us for a good part of the game."

UMass scored first in the first period before senior forward Alex Smibert netted the equalizer off an assist from Morris. With the two teams skating four-on-four, senior defenseman Deena Birney scored off an assist from junior forward Danica Polson, lifting Liberty to a 2-1 lead. However, the Minutewomen struck back with a power-play goal to tie it at 2-2 after two.

Finally in the third, Morris finished assists from freshman forward Val Manchak and senior defenseman Dana McLeod at the 10-minute mark before converting an empty-netter with 15 seconds remaining in regulation off a feed from senior forward Vanessa DeMerchant.

"They played tough defensively and a good game as far as limiting our chances inside," Lowes said. "They probably blocked 10-15 shots and we probably missed a few chances we should have had. It took everything we had to get that go-ahead goal

The Lady Flames nearly doubled up UMass in shots as well as goals, holding a 40-21 edge on the night, and freshman goalie Kayla Savoie-Penton made 19 saves to improve to 4-0.

"Kayla played well today," Lowes said. "She made a breakaway save and a couple saves off odd-man rushes when we made a couple bad jumps. We controlled play offensively, but made some defensive mistakes and gave them some good scoring chances."

Liberty took a penalty late in the game and UMass pulled its goalie to give it a six-on-four power play before Morris put the Minutewomen away.

"They could have had four or five goals on (Savoie-Penton), but she made some big saves when we needed her to," Lowes said.

Lowes hopes the Lady Flames can rekindle the energy they showed in the clutch for three periods in Saturday's 4 p.m. opener at Rhode Island.

"We didn't have the urgency for 60 minutes tonight," he said. "We found a way to get it done tonight (but) we're struggling to get there. We've got a big target and have got to find a way to consistently keep that fire stoked for entire games. Rhode Island is going to test us physically and mentally, so we will have to be focused and find a way to get through it."