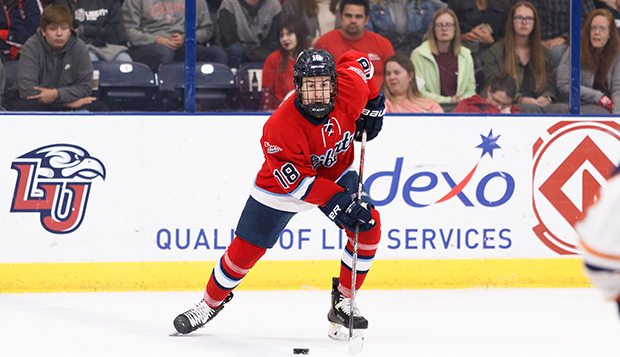 The fifth-ranked Flames (8-0, 3-0 ESCHL) withstood a third-period comeback bid to exact a measure of revenge against the No. 21 Orange (1-3-1, 0-3), who rallied from two goals down to win last season's tournament championship game in overtime.

"Overall, I thought we played pretty well," Liberty Head Coach Kirk Handy said. "They fought back. We've got to tighten up our special teams a bit. They got two on the PK and we didn't execute on three power-play opportunities, so it'll be nice if we are able to get those (in Saturday's 2 p.m. rematch)."

Two of Liberty's better offensive opportunities in Friday's first period came off the sticks of senior defensemen Jacob Fricks, whose shot from the top of the right circle was blocked by Orange goalie Eric Parker, and Chaydan Lauber, whose rocket from the same spot was deflected off the left post.

The Flames, who held a 44-17 shot advantage, finally found the back of the net with 11:18 left in the second period in large measure due to a defensive stand, killing Syracuse's five-on-three power play and capitalizing with a shorthanded score.

With Bochinski and freshman defenseman Colin Baird in Liberty's penalty box, sophomore goalie Tyler Myers made a couple clutch saves before Lauber generated a quality scoring chance on a counterattack. Seconds after a restart in the Orange defensive zone, Bochinski was released from the box and stealthily stole the puck back near the Flames' blue line. He alertly started a fast-break give-and-go with senior forward Quinn Ryan before finishing it with a shot from deep in the left circle.

"Bo played a great game," Handy said. "He made some really nice plays out there tonight. Quinn and him did a great job on that PK. That was a huge five-on-three and Baird and Lauber were fantastic on the back end for us."

Bochinski assisted the Flames' second score by pouncing on a loose puck at the top of the right circle and threading a crossing pass through traffic to senior forward and alternate captain Josh Hamilton in the right crease, where he trapped it and slipped his shot past Parker inside the right post  for a 2-0 lead at the 17:44 mark.

"I was playing a lot with (Victor) Blomberg and Hamilton tonight and those guys are fast," Bochinski said. "They don't lose puck battles and they don't lose puck races. We're a fast team and a physical team and when we take the body on these guys, it opens up a lot more space and we can cause a lot more turnovers. As the game went on, we kind of settled in a little more and started playing our game and we opened up the ice a lot more, caused a lot more turnovers, and were able to capitalize on our chances."

Exactly two minutes later, Bochinski struck again with another high-energy goal assisted by Ryan, who intercepted the puck behind his own cage and sent a quick outlet pass to Bochinski near his own blue line. He accelerated past Syracuse defenseman Luke Caddo up the right wing before ripping a shot from the top of the right circle for a 3-0 advantage.

"Quinn set me up for two beauties and it's always a blast playing with him," Bochinski said. "He's obviously one of the best players in the ACHA and when you're playing with him, all you've got to do is find open ice and be ready for a puck. I found open ice tonight and he put the puck right on my tape twice."

Back-to-back power-play goals in a span of just over two minutes got the Orange back into the game by the midpoint of the third period. First, with 12:26 to play, senior forward Peter Owen Hayward potted a top-shelf putback from deep in the left crease. Then, with seconds remaining on a second Syracuse five-on-four, fellow forward Zack Gordon dug a loose puck through the five hole after a scrum out in front, cutting the deficit to 3-2 with 10:06 to go.

Bochinski missed an opportunity at a hat trick after receiving a fast-break feed from Hamilton with 5:55 remaining in regulation. However, he made the most of his final chance, stealing the puck in the neutral zone and firing it into an empty net from the high slot with 19.9 seconds left.

"Quinn (Ryan) was pressuring the defensemen hard and I kind of get a gift to get the empty-netter to complete the hat trick," Bochinski said. "It felt good. It was definitely in the back of our minds that they took the conference title from us last year, but the job's not done. If we win tomorrow, we can really kind of enjoy the sweep."

The Flames returned junior forward Cole Gammer, who provided a solid forecheck and generated some quality scoring chances, but were without junior forward Devin Pierce and sophomore forward Arturas Laukaitis.

"We obviously missed Pierce out there tonight, his leadership, his speed, and his energy," Bochinski said. "But that's where other guys have got to fill the gaps and tonight the guys who stepped into different roles did a great job."

With a quick turnaround, and after two Homecoming Weekend alumni games, the Flames and Orange will return to action at 2 p.m. at the LIC, with the rematch webcast live by the Liberty Flames Sports Network (LFSN) and carried on ESPN+. 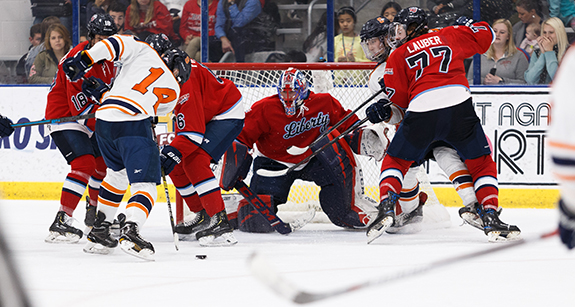