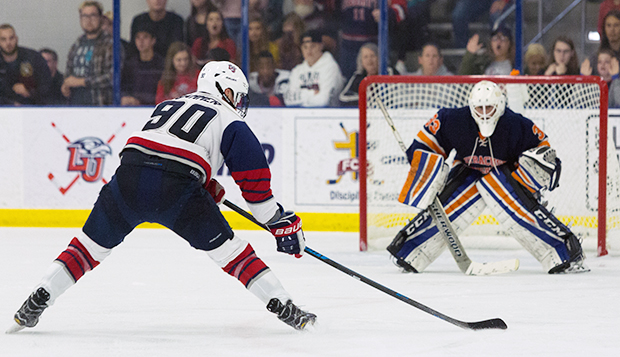 Flames forward Cole Gammer participates in a shootout in the Syracuse series opener last fall at the LIC. After an injury, he will make his season debut on Friday. (Photo by Gabrielle Calhoun)

The luck of the Irish was not with Liberty University's ACHA Division I men's hockey team the last time it met Syracuse — in last March's championship game of the ESCHL Tournament, played in West Chester, Pa., on St. Patrick's Day.

The Flames, who were vying for their third consecutive tournament championship since joining the league in 2016-17, let 1-0 and 2-1 leads slip away in a 3-2 double overtime loss that lasted 96 minutes, making it one of the longest games in the 20-year coaching career of Liberty Head Coach Kirk Handy.

"There are not too many games you put up 75 shots and lose," Handy said after the Flames outshot the Orange, 75-55. "We had our chances."

For Syracuse, the come-from-behind upset continued its historic run of dramatic success that season. The win was the Orange's seventh in a row, with all but one decided in sudden-death overtime.

While the tournament title marked the end of the road for then-No. 20-ranked Syracuse, Liberty went on to compete in the ACHA DI National Championships on the strength of their top-10 ranking and regular-season ESCHL title defense.

This season, the Flames have carried that momentum into the regular season, winning seven in a row to start the 2019-20 campaign and moving up to No. 5 in this week's ACHA DI national rankings. They will look to build on that run of success this weekend to prepare to travel to Michigan to challenge top-ranked, 2018 ACHA DI national champion Adrian College on Oct. 25-26.

Prior to Saturday's 2 p.m. second game between the Flames and Orange, Liberty alumni in town for Homecoming Weekend will sharpen their skates for two competitive clashes on Saturday morning to help celebrate 35 years of Liberty Hockey. A "Legends Game" for players ages 40-and-over is scheduled for 10:15 a.m., followed by a "Young Guns" contest at 11:30 a.m. and an alumni luncheon at 1:30 p.m. A complete schedule of hockey alumni weekend events is available online.

All-Time Series: The Flames lead the Orange, 4-3, in ACHA Division I matchups since Syracuse joined the ESCHL in 2017.

Defensively, the Flames are coming off a five-for-five performance on the penalty kill in the second game of its ESCHL-opening sweep at Rhode Island, anchored by seniors Jacob Fricks, Chaydan Lauber, and Basil Reynolds.

Syracuse Scouting Report: The Orange, which was swept at New York University in its ESCHL-opening series last weekend, are led by senior forward Peter Owen Hayward (2G, 2A) and 6-foot, 4-inch defenseman and alternate captain Ford Hatchett, who has assisted half of Syracuse's 12 goals this season. Fellow defenseman Luke Caddo scored a goal and distributed two assists in a 4-3 second-game loss at NYU.

Coaches: Kirk Handy is in his 20th season as Liberty's head coach and has compiled an overall record of 439-180-29. Connor Treacy is in his second year as Syracuse's head coach after serving as an assistant the previous five seasons and has posted a 22-12-2 record to date.