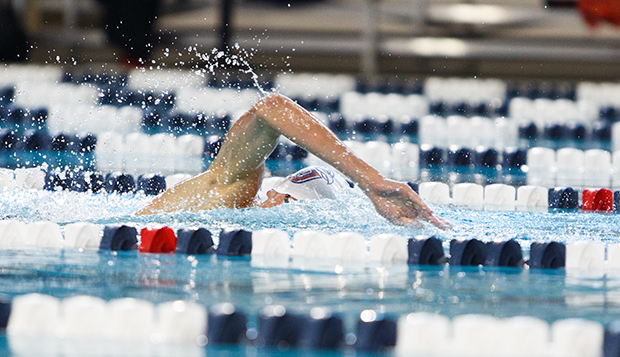 While earning numerous national cuts and breaking multiple program records, 16 members of Liberty University's men's swimming team fueled the Flames to a first-place finish out of 24 schools in the Collegiate Club Swimming (CCS) Eastern Regional Championships on Saturday and Sunday at the University of Maryland.

"It was awesome, really exciting seeing how fast we swam," Liberty Head Coach Heath Grishaw said. "Pretty much all of the guys were going close to their best times, in-season times, and it's only the second month of our season. It was very eye-opening to know we have a very good shot to swim even faster at (CCS) Nationals (on April 11-12 in Greensboro, N.C.)."

In the combined men's and women's standings, Liberty placed third overall behind only Penn State (1,011.5) and Maryland (859).

"Last year, we placed third among men's team and fourth in the overall combined score," Grishaw said. "Finishing third overall is even more impressive considering we don't have a women's club team."

Sophomore Ben Klipp, seniors Noah Miller and Charles Fernandez, and freshman Matthew Davidson combined to lead the Flames to a first-place finish in the 200-yard freestyle relay in 1 minute, 26.78 seconds, lowering the club record established in the program's first year in 2017-18 by a full second. The same foursome swam in the same order in the 400 free relay, which won in 3:12.54, taking two seconds off the program record.

"I am really ecstatic with the relays," Grishaw said. "They did great and Noah Miller and Ben Klipp did a phenomenal job with their leadership. Noah Miller is in better shape than he's ever been and the confidence he has is contagious."

"Robert's 200 free time was spectacular this early in the season," Grishaw said. "I feel very confident that our 800 relay will be able to swim under 7:00 and be in the top three at nationals, with all four guys capable of going under 1:45. I'm excited and looking forward to it. We have high goals."

Liberty will conclude its fall schedule by traveling to meets at Elon (N.C.) University on Oct. 26 and North Carolina State from Nov. 2-3.