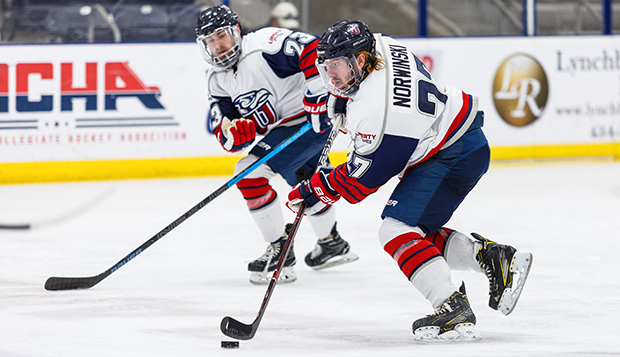 Liberty University's ACHA Division II men's hockey team won two out of three games in its Fall Showcase over the weekend at the LaHaye Ice Center. Wins over UMass Lowell on Friday and MSU Denver on Saturday improved the Flames' record to 8-0 before they sustained their first setback of the season against North Carolina State on Sunday afternoon.

In Friday night's opener, the Flames responded with five unanswered goals to defeat UMass Lowell, 5-1. The River Hawks scored first, just 1:14 after the opening faceoff, before sophomore forward Darren Carter netted the equalizer at the 4:10 mark, stealing the puck just inside the blue line and skating into the slot before firing a wrist shot through the five hole.

Liberty added two more goals in the final 2:22 of the first period, when junior forward Michael Niederer tipped in sophomore defenseman Maxx Mitchell's shot through the left circle and sophomore forward Timothy Doe recovered a loose puck and fired a sharp-angled shot into the upper netting with 1.8 seconds left.

Just 2:47 into the second period, Carter netted his second goal with a backhand in the left crease off an assist from sophomore forward Peyton Nash, who flipped the puck back from along the boards.

Freshman forward Alex Schneider received a faceoff won by sophomore forward Johnny Kettelle at the top of the left circle and ripped a wrist shot into the top right corner for the final score with 2:47 remaining in regulation.

Graduate forward Drew Crilly's slap shot of a loose puck inside the left circle as a power play expired lifted Liberty to a 1-0 lead on MSU Denver with 8:49 left in the first period of Saturday's second game, opening the floodgates for an 8-0 victory.

With 2:55 left in the first, Doe skated toward the left corner before sending a backhanded shot from the left endline off the back of Road Runners goalie Jake Larson for a 2-0 advantage. Freshman forward Luke McFarlane stretched Liberty's lead to 3-0 by tapping in assists from Crilly and Mitchell with 18:17 left in the second period.

Back-to-back goals by Kettelle in a 17-second span of the second period made it a 5-0 contest with 6:30 left before senior defenseman Ryley Richardson threaded a shot from the point through traffic, deflected in by Niederer, just 41 seconds later. Then, at the 3:49 mark, Carter sent a beautiful cross-crease assist to Nash for a finish in the left circle, widening Liberty's edge to 7-0, before sophomore defenseman JD George capped the scoring 53 seconds into the third with a shot from the right circle that glanced off Larson's glove.

In Sunday's rematch of the Southeast Regional final loss to NC State that ended the Flames' 2018-19 season, the Ice Pack staged another upset at the LIC, opening a 3-0 first-period lead en route to a 5-3 victory.

Liberty rallied back within 4-3 by the end of the second on goals by freshman Jaime Ross off assists from sophomore forward Justin Barstead and junior defenseman Adam Norwinski; McFarlane off a Niederer feed from behind the cage; and junior forward Blake Flanders set up by Crilly and Niederer. But NC State extinguished the Flames' comeback bid in the third period, when it added an empty-net goal as time expired.

The Flames will host Drexel this weekend in the final series of an 11-game homestand to start the season, with the puck dropping at 10 p.m. Friday and 6:30 p.m. Saturday.