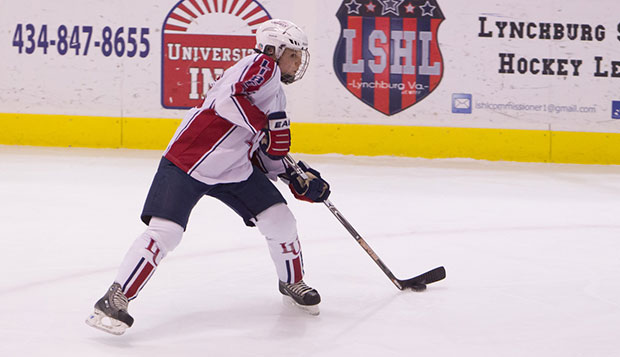 For the second day in a row, Liberty University's Division I women's hockey team spotted Chatham University's NCAA Division III program an early goal before rebounding to double up the Cougars, this time by a 6-3 score, Sunday afternoon in Pittsburgh, Pa.

The Lady Flames (25-2) erupted for five second-period goals, including two by senior forward Stacey McCombe, who assisted two others in the productive 20-minute stretch, to win their fourth game against an NCAA Div. III team this season.

"Our girls played an awesome second period," Liberty head coach Paul Bloomfield said. "Everything clicked and we had great passing. We really dominated the play."

McCombe, the team captain, set up freshman center Carrie Jickling 31 seconds into the second period, tying the game at 1-1, before lifting Liberty into the lead to stay less than three minutes later, finishing a feed from Courtney Fischer.

A minute and a half after that, freshman defender Sarah Fowler gave the Lady Flames a 3-1 cushion off an assist from Nikki McCombe, the sister-in-law to Stacey, who made it 4-1 two minutes later, 6:22 into the second, with her second goal set up by Jenny MacArthur and Autumn Kucharczyk.

"We gave them a little break for about six minutes and got another one on them," Bloomfield said of the game's only power-play goal, Amanda Grainger off assists from Fischer and Stacey McCombe.

Chatham pulled back within 5-2 on a goal by Morgan Becer with 11 seconds left until intermission before Liberty got it back 5:46 into the third period, scored by Nikki McCombe and set up by Katie Girnus.

The Cougars capped the scoring 10:27 into the third on a second goal by Casey Morfeld.

"In the third period, we got into the penalty situation, which slowed us down a little bit," Bloomfield said. "At one time, we had three in the penalty box at once. We still outworked them and out played them (overall in the period)."

Though the Cougars' 4-21 record might not indicate it, they actually gave Liberty as good a test as it has had since traveling to Chicago and splitting two games against Robert Morris (Ill.) nearly a month ago.

"It's good for us to play these teams that are better," Bloomfield said. "It helps us sharpen our game. There's always risks involved. You could potentially have injuries, but we came out of it injury-free.

"I'm glad when we've got victories and everybody's healthy," he added. "Now, we've got two weeks where we can lay back and get ready for nationals."

The Lady Flames are expected to maintain their No. 1 ranking for a third consecutive ACHA DI poll this week and enter the March 6-10 national tournament in Ashburn, Va., as the top seed out of eight teams in the field, needing to win five games to claim their first championship title.