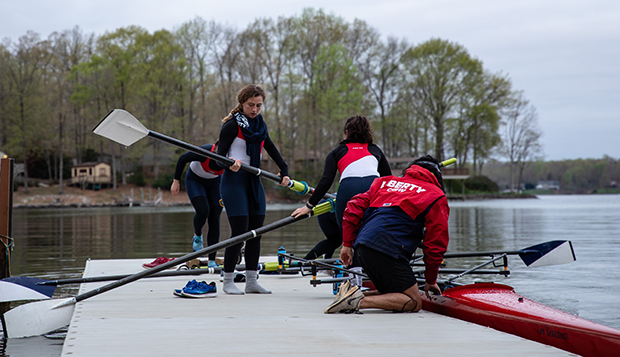 Those willing to put in the work through early-morning preseason rowing practices on Smith Mountain Lake will reap the rewards over the next four weekends, when Liberty University's crew team travels to four regattas to complete its fall competition schedule.

Head Coach Debbie Prowse will take a women's Varsity 4 boat to this Saturday's and Sunday's 55th rowing of the Head of the Charles, hosted by her alma mater, Boston University.

That lineup is virtually the same as last season's women's Novice 4, which won an ACRA National Championship last May on Lake Lanier near Atlanta. Sophomore Morgan Schaible, an experienced recruit who fills in the 2 seat, is the only newcomer. She complements sophomore bow Lindsey Bicknell, senior 3-seat rower Victoria Drumheller, junior stroke Joanna Moran, and senior coxswain Kaylee Ruiz.

"It should prove to be an exciting weekend for us and we are looking forward to it," Prowse said. "There will be a lot of stiff competition from a lot of big-name schools."

The Lady Flames will be seeded 28th out of 36 boats in the race, looking to surprise some teams with their early-season conditioning despite rowing in the varsity ranks for the first time.

"We are just looking to do our best," Prowse said. "We have our strategy planned, and have been practicing. It will be a new course for my coxswain and the rowers as well. Mentally, we have the image of the Charles in our mind and know the landmarks. It will be challenging but a lot of fun as well."

She said the 5,000-meter course features several twists and turns and traverses under six bridges, with masses of spectators cheering along the way.

"There will be certain areas on the race course where a lot of bunching up happens because it is hard to accurately seed the boats this early in the season," Prowse said. "Passing gets tricky, especially when there are bridges, and the coxswain has to know when to pass and when to hold back."

Ruiz will attend a pre-regatta coxswain clinic led by Yasmin Farooq, an Olympic medalist who is in her fourth year as head coach of the University of Washington's crew team.

"She takes the coxswains through videos and strategies and where to start their turns and how to go under bridges, which helps to level the playing field a little when you are rowing against teams where this is their home course," Prowse said.

Next Saturday, besides the women's Varsity 4, Liberty will enter two men's doubles in the Richmond (Va.) Chase, set to start at 8:45 a.m. on the James River.

Seniors Ryan Krupansky and Brad Weisman will form the most experienced tandem, with sophomore Hayden Handel and freshman Aleck Tilbrook, an experienced recruit from Washington State, teaming up in the other.

"They are pretty evenly matched with power, rowing in the double, and I am looking forward to getting them up to speed," Prowse said.

She also has a handful of new men's and women's rowers who are not quite race-ready yet. But she hopes to have a couple Novice 4 boats prepared to compete in the spring semester, with more potential recruits planning to try out after Christmas break.

"We started the year with a lot of new people, who didn't really understand the demands of what all the practicing and getting up early entails," Prowse said. "Many of them realized, ‘This is harder than what I expected,' and we ended up losing several people. For those who remain, we are taking it really slow, trying to get their base cardio and fitness levels up. We don't want to rush it and stress everybody out.

"Rowing takes time," she added. "It is tough to learn the synchronicity and the skill of the sport. Some natural athletes take to it right away and get the form and technique down. We would like to see our novice men's and women's teams grow, but we are not trying to rush anything." 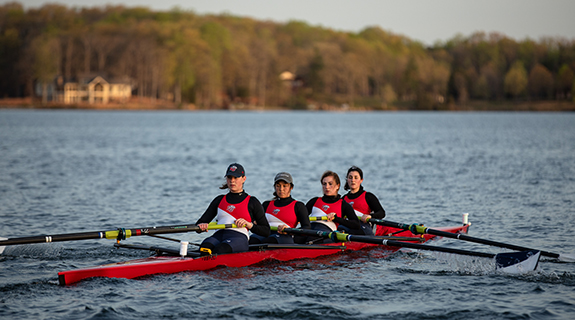