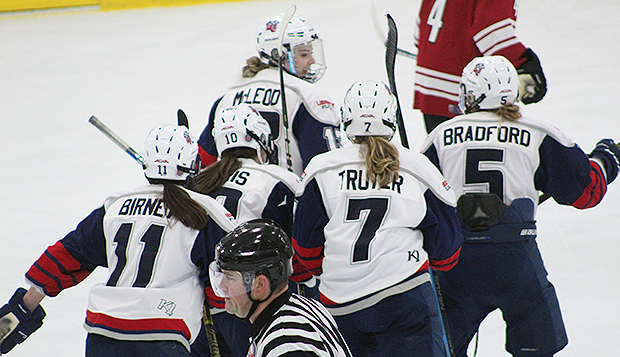 Liberty players celebrate a goal against UMass in Saturday's opener at the LaHaye Ice Center. (Photos by Ted Allen)

A five-goal second-period outburst, including two of its three power-play goals, propelled Liberty University's ACHA Division I women's hockey team to a 9-2 triumph and sweep of Massachusetts on Sunday morning at the LaHaye Ice Center.

"It was a good rematch," Lady Flames senior defenseman Deena Birney said. "It was a really physical game and I'm glad we were able to keep our control and beat them on the power play."

Liberty got two goals from senior forward Vanessa DeMerchant and freshman forward Val Manchak, who added two assists, and a goal and two assists from both Birney and junior forward Shelby Bradford in the victory.

"Everybody did a good job contributing," Liberty Assistant Coach Justin Forth said. "Lines one through four were on the scoresheet, so the depth was there. The girls worked hard. We continue to try to hammer the little things home and they're continuing to get better every day."

Lady Flames senior forward Tiana Lisle netted the only goal of the first period with 53.5 seconds remaining, finishing a feed from Bradford.

Liberty doubled its lead to 2-0 just 34 seconds after the second-period faceoff on DeMerchant's first of two power-play goals, off an assist from Manchak. Back on the man advantage, after UMass forward Kat Nikolopoulos cut the deficit to 2-1, Birney finished a feed from Bradford to stretch the gap to 3-1 at the 8:31 mark.

"We (defensemen have) been working all semester on moving laterally on the point and getting low, hard shots on the net, and it payed off today," Birney said. "Forwards were able to crash and put traffic in front and we were able to get those greasy goals sitting right on the line. Val (Manchak), (fellow freshman forward) Yannick (Truter), and Shelby (Bradford) had really good net presence all game and we were able to put pucks out front and they were able to tip them in the net."

The Minutemen responded again on a goal by Kasandra Bienkowski to trim Liberty's lead to 3-2 with 7:46 left in the second. That's when Manchak helped the Lady Flames take complete control, scoring two of the period's last three goals and assisting the other. Just 19 seconds after UMass' second score, she put away an assist from Birney before setting up Yannick Truter at the 2:47 mark and extending the advantage to 6-2 with an unassisted score in the closing 44 seconds.

Liberty continued to pull away with three unanswered goals in the third period — by Bradford unassisted with 13:12 remaining, DeMerchant on a power-play assist from junior forward Danica Polson with 7:44 to go, and sophomore forward Alexis Paulmert set up by Birney and freshman forward Brook Pellizzari with 4:34 left.

The Lady Flames were only whistled for one penalty compared to five for the Minutewomen. Liberty outshot the Minutewomen, 46-21, and freshman goalie Kayla Savoie-Penton made 19 saves.

"We've been struggling on the power play the first few weekends trying to get the right touches and looks," Forth said. "(Today) we did a good job of utilizing our speed. We exploited their defense on the rush … and got pucks to the net."

The Lady Flames will play four games in four days next weekend — at UMass on Thursday and Friday at 7:50 p.m. and Rhode Island on Saturday at 4 p.m. and Sunday at 10:30 a.m.